One of the challenges every film-maker faces is how to convey important information to the viewer.

This process is known as exposition.

Wherever possible, film-makers try to give us that information by using simple character actions and visuals. 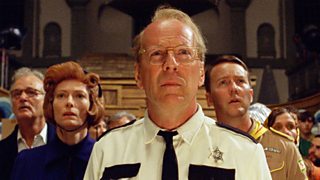 If they want to tell us that a character is a sheriff, they might simply show that character pinning a sheriff’s star to their jacket.

However, other narrative devices may be used to get this information across to the audience.

In Diary of a Wimpy Kid (2010), the film’s hero explains his perspective on events in a voice-over that plays over many scenes in the film.

In third person narration, someone other than the main character provides the voice-over which helps explain and comments on the events, like in Babe (1995) and Babe: Pig in the City (1998).

Written exposition is another device film-makers can use.

In written exposition, on-screen captions or text from within the world of the film are used to convey meaning, direction or extra informaiton. 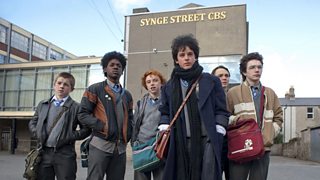 On-screen captions could tell us the name of a new character or identify a new location.

In-world text such as signs, documents and written text from the world of the story are seen on camera and provide us with story information.

Newspaper headlines might be seen or text based forms of communication such as texting, e-mails and letters could be used.