Film narratives are usually linear. That means we see the events of the story unfolding in the order in which they occurred.

For example, in Toy Story we follow Woody and Buzz’s adventure in a linear order, starting at the beginning and ending with the conclusion of the story.

Linear narratives are the most common form.

Sometimes, however, a film might work better with a non-linear plot which presents some or all of the events in a non-chronological order.

Sometimes film-makers might begin their story by showing us the final scenes first.

In Forrest Gump (1994) the main character tells his extraordinary life story to someone else and major events in his life are portrayed as flashbacks. 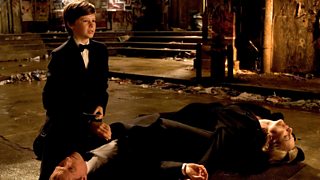 Batman Begins (2005) uses a non-linear approach to transport the audience back in time.

In Batman Begins (2005) the first half of the film follows a non-linear pattern, using flashbacks to themain character's childhood. This shows us how and why he transforms himself into a superhero.

A non-linear narrative may be used to withhold information from the audience. In a mystery, such as a detective drama, a non-linear structure might be used so that we will are surprised when a piece of withheld information is finally revealed.