The once (too often) of the opening stanza is both echoed and refuted with But not too often in the opening line of stanza two. It seems to contradict what he has just said.

He implies that, on reflection, while this was a frightening experience, it was one he found ultimately worthwhile and enriching. We can also see this in the expression I count as gain. He concentrates on the specific reasons he feels the encounter was beneficial in the remainder of the poem.

In choosing the word met to describe this event, he conveys almost a sense of reciprocity and fraternity between humans and animals. It is typical of MacCaig never to assume human superiority in describing encounters with the world of nature.

The alliterative metaphor a sea tin-tacked with rain captures with exact observation the nature of the rain - hard, relatively sparse droplets patterning the smooth surface with neat round imprints.

The alliteration of the hard consonant ‘t’ helps to replicate the metallic sound of the rain hitting the boat. 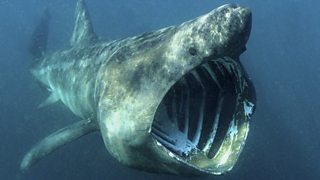 "That roomsized monster with a matchbox brain"

Alliteration and metaphor continue in rich vein in the final line with roomsized monster and matchbox brain.

The contrast and incongruity of the size of the shark’s enormous body compared with its tiny brain is elegantly portrayed here. The linking alliterative consonant ‘m’ serves to further emphasise the comparison.

There is clever use of long and short vowels in this final line too - the long vowels in roomsized monster appropriately extend and elongate the expression to reinforce the size of the shark in contrast to the short, clipped vowels of matchbox brain.