The USA is a founding member of the United Nations (UN). 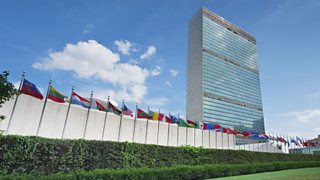 Although the US is an important member of the UN, the relationship between the two has been strained. In most years the US has failed to pay its contribution in full.

The Security Council is the part of the UN responsible for peace making and peacekeeping as well as international sanctions. As a permanent member of the UN Security Council, the US has a very influential role.

There are five permanent members of the council (USA, China, Russian Feberation, France, UK). They have the power to vote against, and effectively veto, any Security Council proposal put forward.

The US has used its veto twice in the last ten years. Both times to vote against resolutions relating to Israel and Palestinians. (The US has consistently backed Israeli actions financially and militarily despite widespread UN and international condemnation)

The US has at times found decision-making within the UN Security Council frustrating or time consuming. Russia and China are also permanent members and have more often use their veto to block US proposals. Recently Russia has frequently used its veto on resolutions about conflict in Syria.

US action around the world

Like many other countries, the US will do what it believes is in its best interests regardless of what the UN or the rest of the world think.

On occasion the US has ignored the UN and its decision-making procedures. For example, the US did not seek UN approval when it decided to invade Iraq in 2003.

However, on most occasions, the US does work within the decision-making processes of the UN Security Council, e.g. leading a response to the crisis in Libya in 2011. More recently, the USA’s diplomatic efforts have lead to resolving issues in Syria.