War is central to the novel. In the background World War Two rages; this is a fitting stage upon which the tensions and conflicts between the characters are played out.

At the beginning of the novel, we notice the presence of a destroyer steaming out to sea as if about to enter the conflict, and at the end of the novel we acknowledge its return: A warship steamed down the loch. 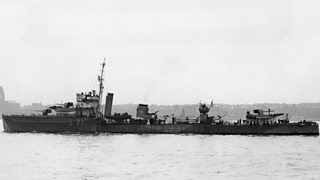 A British Destroyer warship as seen by the cone-gatherers

The conflict that takes place between the characters is dominated by the tension between the cone-gatherers and the locals, namely Duror and Lady Runcie-Campbell.

Duror believes that they have invaded the wood which had been his stronghold and sanctuary and he seeks his revenge.

After the deer drive, Lady Runcie-Campbell feels that her territory is under threat by their presence. I object to being subjected to such a humiliation on my own land.

Identified early on as the enemy, the cone-gatherers are involved in a conflict they are unable to win.

In addition to the external conflicts between characters, several of the characters are fighting their own inner battles.

In Duror, the doctor sees a man who has been struggling with his own war for years, coping with a loveless marriage and a challenging mother-in-law; while Lady Runcie-Campbell, in the absence of her husband, is forced to choose between her instinctive Christian ideals and her role as lady of the estate.

Neil, too, must keep his anger at his mistreatment in check for Calum’s sake, but he fails to do so when it counts the most.

Calum is the only one removed from such turmoil. He is too honest, generous and truly meek to be weighed down by rancour and thus has a wonderful superiority that only his brother recognises.