Origins of the Cuban Missile Crisis 1962

In 1959, the focus of the Cold War moved from Europe to Central America and to Cuba. The crisis that developed over Cuba in October 1962 almost resulted in nuclear war and worldwide destruction.

The USA discovered that the USSR was constructing missile sites for nuclear weapons in Cuba. The missiles had been sent there without the USA's knowledge. 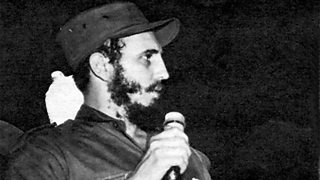 Fidel Castro speaking after the triumph of the revolution

Since 1952, Cuba had been controlled by the dictator General Fulgencia Batista.

American companies controlled much of Cuban business. In 1959, a resistance movement led by Fidel Castro overthrew Batista. Castro ordered that the state should take over all American-owned businesses.

Cuba is 90 miles from Florida. The USA became very worried about having a communist regime so close to its shores. According to the Domino Theory, communism could spread to South America or even to the USA itself.

John F Kennedy became President of the USA in 1961 and inherited a Central Intelligence Agency (CIA) plan to overthrow Castro by force. On 17 April, 1500 Cuban exiles trained by the CIA landed in Cuba. The US Air Force was meant to protect the exiles.

International opposition led to the withdrawal of air support and the exiles were left exposed. Castro’s troops equipped with Soviet tanks and artillery defeated the Cuban exile army. By 20 April, the exiles were either dead or in prison. This was a humiliation for the USA and the new President Kennedy.

The USA boycott of Cuban goods meant that the Cubans were struggling to survive. They needed a new trading partner and Castro feared a new attack from the USA. He looked to the USSR, who were willing to provide assistance.

Khrushchev was under pressure - building the Berlin Wall had made communist governments look unpopular. NATO had also placed nuclear missiles in Turkey which could reach Moscow.