Results of the crisis

The East German government now had complete control over their sector of Berlin and could stop people leaving or entering. It is estimated that over 260 people died trying to escape.

There were checkpoints, most famously Checkpoint Charlie, where those who had permission to cross into the West would go.

Many thousands of people found ways of escaping - they dug tunnels, used hot air balloons and hid under cars or in car boots.

Western leaders protested but there was little they could do. The East Germans (most likely under Soviet orders) calculated that the Western powers would not risk a war to stop them putting up the Berlin Wall.

In 1963, President Kennedy visited Berlin to reassure Berliners that the USA would not abandon them.

It was then he made his famous 'I am a Berliner' speech next to the Berlin Wall. 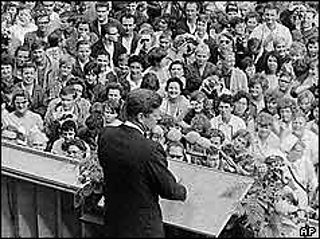 There are many people in the world who really don't understand what is the great issue between the free world and the communist world - let them come to Berlin!

There are some who say in Europe and elsewhere we can work with the communists - let them come to Berlin!

All free men, wherever they may live, are citizens of Berlin. And, therefore, as a free man, I take pride in the words 'Ich bin ein Berliner' ['I am a Berliner'].

The Wall was an embarrassment for communism. It appeared that communist governments had to ‘imprison’ its people to ensure they stayed. This was a propaganda victory for the West. The Wall remained until 1989.