The initial focus of the poem is the beggar who sits on the steps of the basilica. The imagery is almost grotesque and emphasises the terrible condition of this man with his hands on backwards.

The sibilance of the simile sat, slumped like a half-filled sack creates an incredibly vivid image suggesting that he can barely support his own frame. The sack metaphor continues in the description of his tiny twisted legs from which/sawdust might run. This figure is no longer a man but merely the deformed shell of a human being filled with stuffing.

The lack of movement or animation in the description of the beggar conveys the impression that he has lost any spark of life or vitality. The effect of MacCaig’s imagery is to show how he is dehumanised by all those that pass him, that he is more an object than a man.

As this stanza continues, MacCaig deliberately juxtaposes this pitiful, crooked, pathetic individual against the grand backdrop of the three tiers of churches that comprise the basilica. 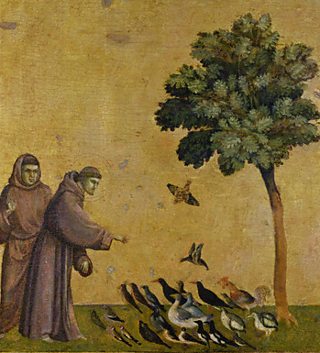 What is being emphasised here is the incongruity that such an architecturally complex building was used to honour a priest with such simple, plain tastes and philosophies. St Francis himself is alluded to here brother/of the poor, talker with the birds.

The speaker reveals a fundamental disconnect between what St Francis represented and the way he is now honoured, not through acts of compassion and empathy but in the building of lavish, expensive constructions like the basilica.

The final lines of the first stanza create a bitter, caustic tone as the speaker wryly notes how, unlike St Francis, the beggar had the advantage/of not being dead yet. The effect of these lines is to suggest that being alive is the only thing the beggar has in his favour, yet what is really implied is that perhaps it would be better if he were dead rather than being forced to endure this terrible existence.

The final word 'yet' has a sinister effect, suggesting that the beggar will not survive this pitiful way of life for much longer.