There is a divide in the opinion about war between the older and younger generations.

This is evident when Massimo says Nobody really wants a war. To which Franco replies:

A lot of the young guys that come into the shop. To hear them talk you’d think they cannie wait.

Franco seems naïve in his enthusiasm to sign up to the British army. He believes the army will give him freedom and independence. This is apparent when he says I don’t have to answer to anyone. No any more.

He believes himself to be invincible, while Rosinella worries that He could get blown to bits.

However, Rosinella also has her own denials about war.

She believes Scotland’s involvement in war does not concern her family. She says:

it’s got nothing to do with us, Massimo. We’re Italian, we just live here. It’s not our country.

Even when Italy enters the war against Scotland she does not believe there is a threat to her family. 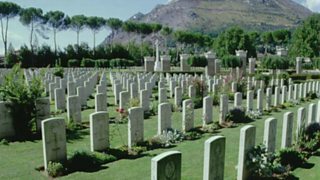 The violent effects of war become real for the Pedreschis when their shop is attacked by an angry mob. Even though Massimo is well-liked in the community, they turn on him because ultimately he is Italian.

Because of their Italian heritage, Massimo and his father are arrested. Rosinella and Lucia are then left to fend for themselves.

We learn about the horrors of war through Massimo’s monologue. He describes the pain and suffering of Italians at the hands of the British army. Massimo is afraid to think about what might happen to his family should he not return. He says:

Massimo is also afraid for his father. He tells us I kept asking for news of ma faither but nobody would tell us anything. Massimo’s father eventually turns up. Although he jokes with Massimo, it is clear he is fearful of the situation. Massimo tells us how the officers try:

Massimo pleads to the officers You cannie split us up. He’s ma faither. Let me go with him. However, the officers split them up anyway.

War is responsible for the death of Massimo’s father, who dies as a war prisoner when the Arandora Star ship is attacked and sinks. Franco is also killed at war. This has devastating effects on Bridget who is left on the shelf as she cannot get over the love she has lost.

Poverty is also a devastating effect of war. Italy has been obliterated. Luigi tells Massimo about the destruction of Monte Cassino and says What’s left of Cassino? You tell me that. Every single street – (Makes exploding noise) His livelihood has also been destroyed and he tells Massimo I lost my olives, my pigs, my hens, my grapes… The Pedreschi’s shop is affected by rationing as Hughie lists the items they can no longer obtain, he says:

No snowballs, no sponges, no flakes, no tick.