Khrushchev’s view of Kennedy and mistakes by the leaders

The Russian leader's opinion of Kennedy resulted in Khrushchev forming an inaccurate view of the type of leader Kennedy was. This meant that Khrushchev was willing to take the risk of placing intermediate-range ballistic missiles on Cuba in 1962.

Meeting at the Vienna Summit 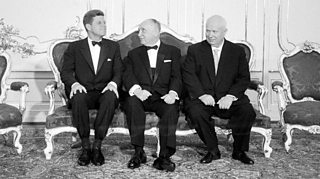 In 1961, Khrushchev had met Kennedy at the Vienna Summit to discuss nuclear proliferation and the situation in Berlin. Khrushchev noted Kennedy was young and good-natured, but inexperienced. This led him to believe that he could manipulate and intimidate Kennedy.

Kennedy was seen as weak and ineffective due to his handling of the Bay of Pigs invasion of 1961.

Khrushchev mistakenly believed that Kennedy could not mount effective military resistance against any Soviet military build-up in Cuba.

Khrushchev’s view can also be partially explained by events in Berlin. The East German government had constructed the Berlin Wall in 1961, forcibly preventing many East Berliners from fleeing to the West.

Although this was used to create effective anti-communist propaganda, Kennedy did not take action over the building of the Berlin Wall. He criticised the construction but did not make a military response. This may have led Khrushchev to question whether Kennedy was likely to take any sort of military action in the future.

Kennedy made the error of assuming that the Soviets had changed their nuclear stance to that of a ‘first strike’ policy. The Americans continued with nuclear tests throughout the crisis, raising tension.

Kennedy’s administration did little to hide their intolerance of Castro. They forced him into siding with the Russians after the Bay of Pigs invasion and Operation Mongoose.

Kennedy and the US administration were unable to see the apparent hypocrisy of the fact they had missiles close to the USSR, but refused to allow the Soviets to hold the same position.