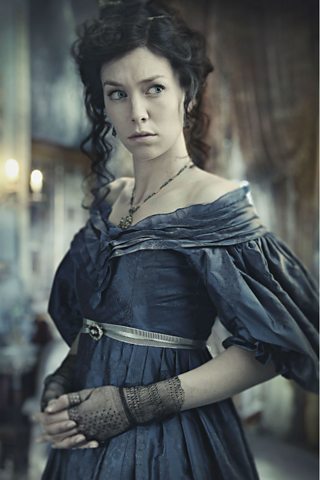 Just like Pip, Estella is an orphan and is subject to abuse by her adoptive mother, Miss Havisham. In Estella's case it is psychological rather than physical abuse. She is brought up to despise men but to use her beauty to attract them and then break their hearts. Pip is possibly the first of her victims. Although only a child herself, she ridicules his background and lack of education. When she grows older, however, she seems to have developed a soft spot for Pip. She repeatedly warns him that she cannot love him in return but he will not listen.

Estella's upbringing means she becomes cold and cruel. Dickens makes it clear that Estella behaves as she does only because of her upbringing, so the reader is sympathetic towards her.

Estella enters into a disastrous and abusive marriage with Bentley Drummle. When he is killed she becomes a widow, free to associate with Pip once more.

"So," said Estella, "I must be taken as I have been made. The success is not mine, the failure is not mine, but the two together make me."

How has Estella come to be the person she is?

How to analyse the quote:

'"So," said Estella, "I must be taken as I have been made. The success is not mine, the failure is not mine, but the two together make me."'

How to use this in an essay:

If Estella had remained with her birth parents, she would have been brought up as the daughter of a convicted criminal (Magwitch) and a woman accused of murder (Molly); however she might very well have been better for it. Instead, she is sent for adoption and is brought up by Miss Havisham who manipulates her and deforms her character. By the time we meet Estella in the novel, she is cruel and heartless and seemingly unable to make good choices for herself. Estella eventually turns on Miss Havisham and the near repetition of 'made' and 'make' strongly reinforces the idea that Estella is the creation of another. She obviously feels intensely about what has happened to her and uses the word 'must' to indicate the depth of her feelings. However, she takes no responsibility for the 'success' or 'failure' of Miss Havisham's experiment.