The development of foreign colonies

West Africa was left impoverished by its relationship with Europe. At the same time the economic development and wealth of Europe and the European colonies in the New World grew.

The transatlantic trade also created the conditions for the subsequent colonial conquest of Africa by the European powers. Before Europeans arrived, some of the peoples of West Africa traded using the traditional caravan routes carrying slaves and other 'commodities' across the Sahara to the Mediterranean.

The Atlantic coast is where Europeans had direct contact with Africans. Fear of disease prevented the Europeans moving inland. They could not dominate further than their guns could fire, from ship or fort. 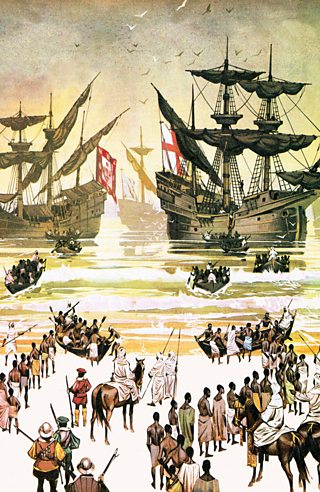 Slaves being loaded into ships on the west coast of Africa

The West African coastal culture was able to defend itself from attack. Europeans instead relied on peaceful regulated trade where Africans operated on their own terms collecting customs and other duties.

This contact with European traders altered the geography of the slave trades operating in Africa. Traders ensured that much of the slave trade moved to the Atlantic coast. As demand grew they also caused the spread of trade (and sources of captives), further into the African interior.

With the expansion of the European slave trade, the coastal societies of West Africa were newly affected in the following ways:

Estimates that between 1701 and 1850, 77 per cent of slaves shipped across the Atlantic (10.1 million) were from along the West and West Central coasts mean that the slave trade had a huge impact on the countries of Togo, Benin, Nigeria, the Democratic Republic of Congo and Angola, and the Gold Coast (Ghana).