Effects of the trade on African societies in West Africa

Impact on the economies of West Africa and West Central Africa

Between the 1680s and the 1780s the value of Africa's Atlantic trade rose six-fold. At its peak trade was worth £47 million.

By the mid-18th century, slaves were Africa's main export. In Western Africa the slave trade represented as much as 95 per cent of the value of their exports.

The price Europeans paid for a slave rose from £3 per head in the 1680s to £30 by 1800. It has been estimated that over 10 million Africans were transported across the Atlantic in the 18th century. 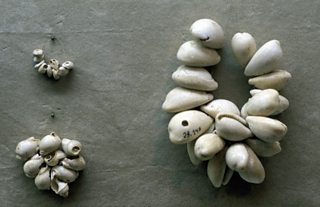 Cowries, oval shells of different sizes with serrated edges, were one of the largest commodities imported by the British. They became a vital part of the system of exchange between Europeans and African traders. Slavers paid around 25,000 shells for an enslaved African.

The impact of the gun trade

The mass introduction of firearms was the single most significant technological innovation brought by Europeans to West Africa. Kings and warlords were anxious to trade with Europeans to acquire guns.

Twenty million guns were imported to Africa in the second half of the 18th century. Many guns imported by the British were manufactured in Birmingham.

African rulers exchanged captives for guns. Rulers were in competition with each other, so the acquisition of guns provided an edge over their rivals. This increased their drive to capture and sell slaves. The new availability of guns was a direct consequence of the slave trade.

The mass importation of guns for slaves altered the conduct of warfare in Africa and changed the balance of power between kingdoms.

At the height of the Atlantic trade only states equipped with guns were able to resist attacks from their neighbours. The demand for slaves, combined with the supply of guns, encouraged rulers to attack neighbours.