Causes of the uprising

In the years following World War Two, Poland was controlled by hardliner Stalinist Boleslaw Beirut. His death in 1956, coupled with hope that change was coming and encouraged by Khrushchev’s ‘Secret Speech’, meant demands for reform increased.

These calls for a shift in policy largely emerged as a result of an economic structure which was detrimental to the peasants. The system of collectivisation had been forced on Poland by communist leaders, but did little to benefit farmers. There were also food shortages among the working classes.

Events during the uprising 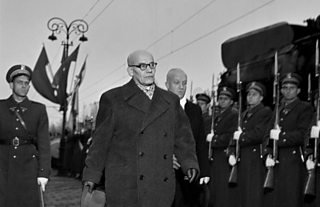 Riots broke out but were subdued by the government. Under the new anti-Stalinist leader, Wladyslaw Gomulka, Poland decided to take a different road to socialism, having interpreted Khrushchev’s speech literally.

Economic reforms were introduced, aimed at improving the lives of everyday citizens and moving away from the traditional Communist doctrine.

Changes included the opening of private shops for business and the break-up of collective farms into smaller private holdings. Peasants could own their land and have more control over produce.

Reaction of the Soviets

The Soviets did not feel able to take action against Poland at this point.

The changes made were economic and did not threaten Soviet power or control over Eastern Europe. The elections resulted in a Communist government with a Communist leader.

There was no attempt to withdraw from the Warsaw Pact. Consequently, Poland continued to form part of the buffer zone between Western Europe and the USSR, which was so important to the Soviets. Also, a Red Army presence remained in the country.