Immediately the reader is presented with the visual image of the poet’s mother Down on her hands and knees/at ten at night on Hogmanay.

These opening lines both establish the evocative setting of the poem, Scotland on New Year’s Eve, and introduce the notion of tradition. This is a central theme of the poem. 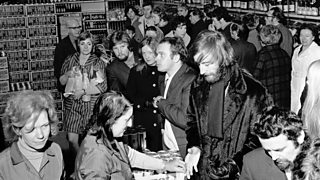 Customers in a busy off licence

These scenes were once universal across the country, as women rigorously cleaned their homes in preparation for the New Year.

To begin a new year with an unclean house was considered bad luck, and superstition is also a theme that is dealt with in the poem.

Lochhead's wonderfully typical picture of Scotland at Hogmanay is enhanced with the specific references to sockeye salmon and blackbun, foods that are especially associated with this time of year.

Food and drink denote prosperity so it was important that these were in evidence at this time of year. This was thought to encourage good luck and prosperity for the year to come.

Even though her mother says Last year it was very quiet, it is traditional to make preparations for any visitors who may turn up to bring in the New Year, expected or otherwise.

The vivid detail of the poet’s mother jiffywaxing the vinolay is accompanied with a parenthetical note that (This is too ordinary to be nostalgia).

The poet deliberately intrudes on the recollection of her memory in order to make a distinction between memory and nostalgia. Lochhead has said in the past that she believes memory is good since it is honest and truthful.

For Lochhead nostalgia has negative connotations - it distorts and corrupts the accuracy of memory through the filter of sentimentality.

Interestingly though, this poem does evoke a nostalgic feeling in the reader precisely because of the attention to specific yet mundane details that she includes.