A great deal of credit for women receiving the vote belongs to the Suffrage Movement.

In the years leading up to World War One, the campaigns of the National Union of Women’s Suffrage Societies (NUWSS) and the Women’s Social and Political Union (WSPU) had done much to highlight the political injustice women endured.

The origins of the Suffrage movement

Organised campaigns for women's suffrage began in 1866. When Parliamentary Reform was being debated in 1867, John Stuart Mill proposed an amendment that would have given the vote to women on the same terms as men. But it was rejected by 194 votes to 73. The campaign gained momentum after this.

19th century feminists talked about "The Cause". This described a movement for women's rights generally. While it had no particular political focus, by the close of the century the issue of the vote became the focus of women's struggle for equality. 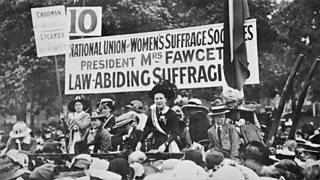 Millicent Fawcett surrounded by other suffragists

The National Union of Women’s Suffrage Societies was formed in 1897 from numerous local women’s suffrage societies. Its leader, Millicent Fawcett, became one of the most prominent middle class women campaigning peacefully for the vote

By the early 1900s, the Suffragists were flourishing, with a rising membership and an efficient nation-wide organisation. By 1914, the NUWSS had approximately 54,000 members, the majority being middle class, respectable citizens.

The Suffragists believed in a gradualist strategy, using non-violent tactics to persuade the country that women deserved the vote. 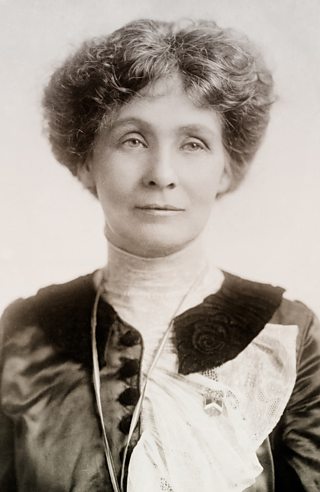 The Women’s Social and Political Union was formed in 1903 by Emmeline Pankhurst and her daughters Christabel and Sylvia.

Emmeline Pankhurst, who had been a member of the Manchester Suffragist group, had grown impatient with the NUWSS and decided to form her own suffrage movement. She believed it would take an active organisation, with young working class women, to draw attention to the cause.

By 1909 the WSPU had branches all over the country. It published a newspaper called 'Votes for Women' that sold 20,000 copies each week.

The Suffragettes motto was ‘Deeds Not Words’. They wanted to heighten the profile of the suffrage movement in the media and parliament as well as achieve success more quickly than the NUWSS was allowing. 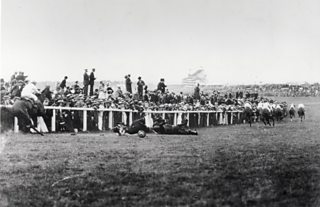 Emily Davidson is struck by the King's horse

From 1912 onwards they became more militant in their methods of campaign. Law-breaking, violence, and hunger strikes all became part of their campaign tactics:

In 1907 the WSPU split into two groups after Emmeline Pankhurst and her daughter Christabel came into conflict with other members of the WSPU's executive body.

Those who left formed the Women's Freedom League. The Pankhursts and their supporters established an even tighter grip on the workings of the WSPU.

Impact of the movement

Historians debate the effectiveness of the different groups in the struggle for women's suffrage: 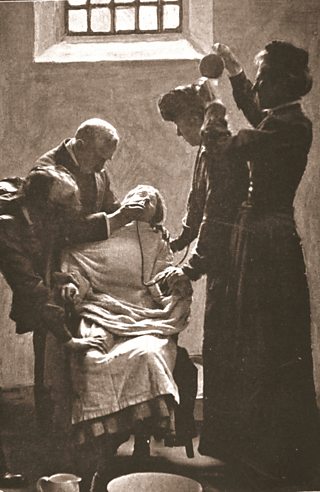 The three groups disagreed over tactics but their message was consistent and they regularly worked together.

In some cases, the rough treatment of many Suffragettes arrested and jailed during their protests won increasing sympathy and support from the public:

The commendable behaviour of the Suffrage movement during the war, including the suspension of protests for the sake of national unity, proved that the women were far from unreasonable.