Love and marriage in A Taste of Honey (play) 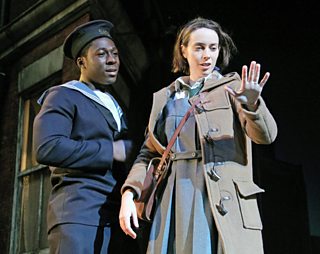 There are several examples of love and marriage in A Taste of Honey. Helen has already been married once, although Jo was the result of an extramarital affair. Helen seems to have little time for sentimental love and is very realistic about the reasons men and women embark upon relationships. For example, she implies to Jo that she married her first husband because she was bored, At the time I had nothing better to do.

Despite the fact that Helen is avoiding Peter at the start of the play, she soon agrees to marry him. However, this relationship appears to have less to do with love and more to do with what Peter can offer her financially. She admits to Jo near the end of the play that Peter, threw his money about like a man with no arms, and previously she has enjoyed showing Jo a picture of the large, white house she will share with Peter once they are married.

In turn he is soon chasing after other women. Helen tells Jo that, He’s gone off with his bit of crumpet. So in spite of the fact that it is Peter who initially pursues Helen in order to persuade her to marry him, he soon leaves her to be with other women. This portrays a rather negative view of love and marriage. Helen admits that for a very short time she thought she loved Jo’s father, For one night, actually it was the afternoon, I loved him. But she also admits that there was something wrong with him, He was just a bit stupid, you know. Not very bright, and the relationship did not last.

Helen’s practical response to relationships is reflected in her anger at Jo getting engaged at such a young age. She tells Jo that she should live her life first and that marriage is difficult when you are young, Oh Jo, you’re only a kid. Why don’t you learn from my mistakes? Helen seems to feel that if she marries at such a young age Jo will ruin her life.

The relationship Jo has with her boyfriend is also short lived. It appears to be a relationship borne out of necessity.

Jo does not want to be alone over Christmas and her boyfriend offers to stay with her. He does appear to care for Jo, such as when he tries to cure her cold, Fix you a cold cure. Where do you keep the milk? At the same time he makes it obvious that he enjoys going out with his friends and does not always want to spend time with her. There also seems to be an understanding between them that even though he has given her an engagement ring, he will not return to her when his next leave is due, I’ll be gone soon, too. What then? he asks, and Jo replies, My heart’s broke.

In a way Jo’s boyfriend and Peter are similar in that, although the Boy is more openly caring towards Jo than Peter is to Helen, both men appear to be more interested in having sexual relationships with women than committed relationships.

Interestingly, the relationship that appears to be fuelled mostly by love is the friendship between Jo and Geof. Although Geof is homosexual he offers to marry Jo simply to be near her. She refuses, knowing that his homosexuality would mean they would not be able to have the kind of relationship that is needed for marriage, I like you, Geof, but I don’t want to marry you.

However, he agrees to stay with her throughout her pregnancy, telling her, I’d sooner be dead than away from you. He only leaves after Helen tells him to and when he realises deep down that Jo should be with her mother during her labour. Geof is also honest enough to realise that Jo won’t be able to cope with having both Helen and himself in her life. Even so he makes Helen agree not to scare Jo with frightening tales of the pain of childbirth. He consistently puts Jo’s needs first in a way that other characters in the play do not.

How is the theme of love and marriage shown in the play?

In A Taste of Honey, Shelagh Delaney shows the theme of love and marriage through:

Helen’s relationship with Peter is a difficult one. He appears to pursue her out of love but this quickly changes when they are married and he begins seeing other women. Any love he offers is a smokescreen for getting his own way with her sexually. When he tires of Helen he quickly rejects her.

Peter
Helen, you don’t seem to realise what an opportunity I’m giving you. The world is littered with women I’ve rejected, women still anxious to indulge my little vices and excuse my less seemly virtues. Marry me, Helen. I’m young, good-looking and well set up. I may never ask you again.

Peter’s real nature seems to be reflected in these words. His lack of concern for the women he rejects is reinforced by his use of the word littered and he is open about his little vices. He makes no attempt to hide his true personality, believing it makes him more attractive to women like Helen.

Jo’s relationship with her boyfriend

Jo’s relationship with her boyfriend develops further mainly because Jo does not wish to be left alone at Christmas. The fact that she tells her boyfriend she does not always want to kiss him indicates that this is not a hugely passionate relationship and in turn he still enjoys nights out with his friends even though he will soon be away from Jo for six months.

Boy
… When it goes dark early it gives me more time for – [He kisses her.]
Jo
Don’t do that. You’re always doing it.

Here Jo displays a lack of passion towards her boyfriend. Even though he tries to kiss her she tells him not to which suggests that her feelings for him are not entirely based on love. She is perhaps more like Helen than she would want to admit in that she is being practical about having the Boy in her life. It means that for once she will not have to be alone over Christmas.

Jo’s relationship with Geof is caring and good-natured. He does not have to stay with her yet he does, even when she is being difficult or moody. He tries hard to help her prepare for the birth of her baby and looks after her until the moment Helen’s return forces him to leave.

Jo
I always want to have you with me because I know you’ll never ask anything from me.

Geof’s feelings for Jo are unconditional. He does not need or expect anything from her yet he still agrees to stay with her and help her. Jo has never been able to experience this type of love before and is glad to have Geof in her life.

Unlike her boyfriend he does not expect to be kissed or to have a sexual relationship with her and this makes Jo comfortable. He provides the sort of maternal love that Helen should have provided but has neglected to do so throughout Jo’s life.

How does Shelagh Delaney use the theme of love and marriage in her play?

Shelagh Delaney uses the theme of love and marriage: