The role of the media in UK politics

The UK has a strong, independent media history with many different newspaper titles, television and radio channels. The media’s role is to inform the public on important issues that affect them whether these issues are local, national or international.

Within the laws of the land newspapers can print more or less what they like. This means different newspapers can choose to report the news in different ways. In their choice of stories, pictures and headlines, newspapers can take a one-sided approach to news reporting. 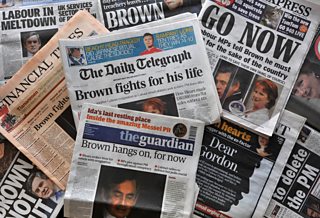 At the time of an election newspapers are often very clear as to which political party they support urging their readers to vote for one political party of another. However, this does not mean that all voters are persuaded by the newspaper they read. Many people buy a newspaper for other reasons, such as sport, or are not influenced by what they read.

Television (and radio) political news reporting is different from newspapers as the law requires television news to be fair and balanced. Television companies are expected to report the facts and to be balanced in their analysis. Different representatives from different political parties are each expected to be allowed to give their views on important issues.

In recent years, a number of TV debates have been broadcast involving the leaders of different parties. Each of these debates were watched by millions of voters. However, post-debate analysis has suggested that most people who watched the debates had already made up their minds and were not influenced by what they heard. This meant that although one party leader or another may have appeared to have ‘won’ the debate, overall the debates had little impact on the election result.

Increasingly people use the internet as a source of information, especially social media. As the internet allows almost anyone to post almost anything they choose, some of the information on the internet is not accurate. However, the internet does allow people almost unlimited access to information which means people are better informed than ever before. For political parties this offers the chance to connect directly with voters and to get their opinions across.