Democracy and the UK Parliament

The United Kingdom (UK) is a democracy. A democracy is a country where the people choose their government. In the UK there are too many people to ask and too many decisions to take, therefore representatives are elected to make decisions. Representatives include Members of Parliament (MPs), Members of the Scottish Parliament (MSPs) (representing the population living in Scotland) and local councillors.

The House of Commons 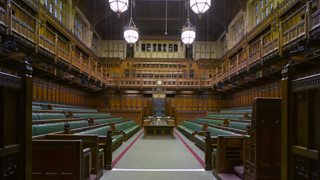 Inside the House of Commons

At the 2017 General Election Scotland returned 59 MPs. 35 of the 59 MPs elected were from the Scottish National Party (SNP). 13 Conservative, 7 Labour and 4 Liberal Democrat MPs were also elected.

One role of MPs in the UK Parliament is to represent their constituents in areas where the UK Parliament takes decisions eg immigration or defence. MPs either debate or ask questions in the House of Commons or they work in smaller groups known as committees.

Other important roles of MPs in Parliament are to help make laws and to scrutinise (check-up on) the work of the government or investigate issues.

The House of Lords

Most peers have been appointed by the Queen on the advice of a prime minister in recognition of their expertise in a particular area eg business, law or science. Others are Church of England bishops and 92 are hereditary peers or people with titles (such as Barons or Viscounts) who have inherited the right to sit in the Lords. 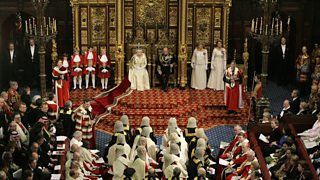 The House of Lords is where Her Majesty reads the Queens Speech every year, but the speech is written for her by the Prime Minister

The UK's political system can be described as a constitutional monarchy with a king or queen as Head of State.

However, it is the Houses of Parliament that make our laws, not the monarch. The monarch only formally passes legislation - this is known as Royal Assent.

When a parliamentary Bill is given Royal Assent it becomes an Act of Parliament. It is then up to the relevant government department to implement that law. For example, the Transport department will deal with new Acts relating to transport.

The monarch must remain politically neutral and does not interfere with the legislative process. No monarch has refused Parliament's wishes for over 300 years. Constitutionally, the UK Government is his/her Majesty's Government.

Every year the monarch goes to the House of Lords to open a new session of Parliament. The monarch reads ‘The Queen’s Speech’ which announces what the government plans to do in the coming year. It is written by the Prime Minister.