Striking a balance between economic development and conservation in polar environments can be achieved through careful sustainable management. 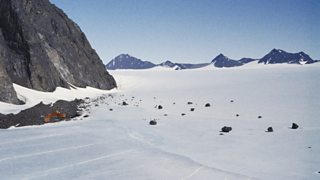 Mineral extraction - reserves of high-value minerals such as gold, silver, iron ore and copper can all be found in polar environments.

Energy - fossil fuels such as gas and oil are abundant in polar environments. For example, oil is being extracted by the USA from Alaskan oilfields near Prudhoe Bay. This has caused concerns as heat from the terminal buildings, workers' houses and the transportation of warm oil through the 800 km pipeline has led to the permafrost melting. Countries are looking to Antarctica as a possible location for new oil supplies, and one of the largest coalfields in the world can be found under the ice cover of this continent.

Fishing and whaling - the polar oceans are increasingly attractive for commercial fishing. Massive amounts of krill are harvested from the waters around Antarctica.

Tourism - polar environments have seen a huge increase in the number of visiting tourists. Over 36,000 tourists visited Antarctica in 2014 to observe its wildlife and experience its beautiful wilderness.

Indigenous people - Antarctica does not have a permanent population (excluding the science bases), but over four million people live north of latitude 60° N. Many indigenous groups such as the Sami (Finland, Sweden, Norway and NW Russia), and Inuit (Canada and Greenland) live a subsistence lifestyle and sustainably manage natural resources.

Scientific research - between 4-5,000 people from over 14 nations live in scientific bases on Antarctica in the summer (the number falling to around 1,000 over winter). Scientists study weather patterns, geology, and past climatic changes. The International Arctic Research Centre is based at the University of Alaska in Fairbanks City.

Governments - governments play a key role in ensuring that technology is used responsibly in polar environments. They have the power to create laws which state how polar environments can and should be used. These laws can be supported by different countries through international agreements.

Conservation groups - many conservation groups believe that polar environments should be protected from all human exploitation so that they can remain in a pristine condition. Greenpeace has set up the 'Save the Arctic' campaign, which highlights the threat of oil spills and the plight of the polar bear in the Arctic.