Immigrants often found themselves under attack, especially at times of general hardship. Sometimes the attacks were from British workers who saw immigration as a threat to their own jobs. At the end of World War One, soldiers returning to the port cities from the horrors of war were in conflict with Asian, Arab, West Indian and African seamen who had also been in the thick of war, bringing convoys of supplies across the Atlantic. Violent riots broke out in 1919 in Liverpool, Cardiff, Glasgow and South Shields which resulted in some deaths. In some cases, mobs stirred up with racist taunts attacked the seamen’s lodging houses, and they fought back.

At times, groups directly targeted immigrants. The British Union of Fascists (‘Blackshirts’) in the 1930s focussed on Jews; the National Front in the 1970s and 1980s targeted black and Asian people; and the British National Party and the English Defence League in the early 2000s campaigned against British Muslims. Where these groups were active, incidents of hate crime rose. 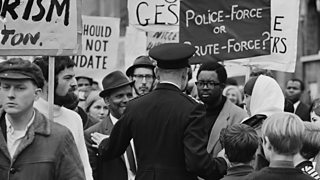 A protest against colour discrimination in the police force in Islington, London, 1967

Experiences of daily racism were a common experience in the 1950s and 1960s when black people could be refused jobs and accommodation (some signs read ‘No dogs, No blacks, No Irish’). While such racial discrimination became illegal, the number of reported racist incidents remains high.

From the 1960s onwards, relations between the police and many black people, especially youth, deteriorated. It was felt by some black British people that they were unfairly picked out and harassed, that racist murders were not properly investigated, and that police were directly responsible for some deaths in police custody but were not called to account.

Two speeches criticising levels of immigration by leading politicians - Enoch Powell in 1968 and Margaret Thatcher in 1978 - had the effect of polarising public opinion, with a rise in the numbers expressing anti-immigrant views.

It almost passes belief that at this moment 20 or 30 additional immigrant children are arriving from overseas in Wolverhampton alone every week - and that means 15 or 20 additional families a decade or two hence. Those whom the gods wish to destroy, they first make mad. We must be mad, literally mad, as a nation to be permitting the annual inflow of some 50,000 dependants, who are for the most part the material of the future growth of the immigrant-descended population. It is like watching a nation busily engaged in heaping up its own funeral pyre.Enoch Powell, 20th April 1968, Conservative Association meeting

People are really rather afraid that this country might be rather swamped by people with a different culture and, you know... people are going to react and be rather hostile to those coming in.Margaret Thatcher, 1978 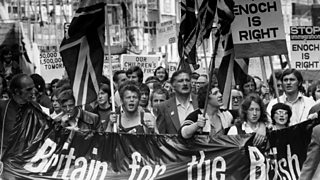 An anti-Asian demonstration in favour of Enoch Powell, circa 1972

In the years following the invasions of Iraq and Afghanistan and terrorist attacks in New York in 2001 and London in 2005, hate crimes directed against Muslims increased.