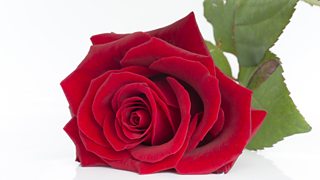 The title itself, Valentine, initially suggests that this poem will deal with the fairly conventional notions of love with its connotations of flowers, hearts and romance.

However, the traditional idea as suggested from the title is subverted from the very beginning in the opening line: Not a red rose or a satin heart. and in line 12: Not a cute card or a kissogram.

By inserting a negative at the opening of both these lines, the speaker is effectively dismissing traditional symbols of love and instead presents an object that is much more truthfully representative of love.

In the repetition of I give you an onion in lines 2 and 13, the speaker emphasises the importance of this gift being accepted by their lover.

The use of the imperative commands Here in line 6 and Take it in line 18, further establishes the forceful character of the speaker.

The gift, the metaphorical onion, is described as a moon wrapped in brown paper. Thus although initially puzzling and unconventional, the allusion to the moon does remind us of more traditional notions of romance.

The brown paper refers both to the texture and colour of the outer layer of the onion as well as reminding us that real romantic gifts do not need to be embellished or concealed within expensive wrapping.

The speaker is asserting then that the onion symbolises a positive aspect of love since it represents refreshing honesty and optimism, often experienced at the beginning of a relationship.

The line It promises light also indicates that this will be an enriching and fulfilling relationship for both parties. This too conveys the optimism and hopefulness of lovers embarking on a new relationship.

The simile like the careful undressing of love can be interpreted both as a reference to the sexual aspect of their relationship, and also the growth of their emotional bond which the peeling away of clothes and layers of personality may bring.

The word careful suggests tenderness, affection, warmth and sensitivity between the lovers as they gradually allow external barriers to come down and expose their true selves to each other.