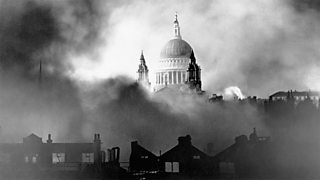 London buildings being bombed during the Blitz

The Germans aimed to stop Britain from producing these materials and goods.

The German Luftwaffe was used to bomb British industrial cities, including London, Edinburgh, Glasgow, Aberdeen, Liverpool, Manchester and Sheffield. This bombing was especially intense during 1940-1941 and was referred to as the Blitz in the British press.

Many German bombs landed in residential areas and on people’s homes.

This led to government action - they encouraged people to build Anderson shelters in their gardens. Large civic shelters were constructed in towns and cities to protect large numbers of civilians. A ‘blackout’ was enforced after dusk. 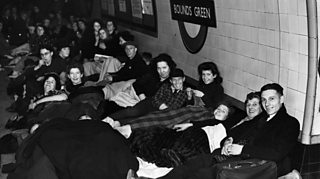 People had to shelter from bombs during the Blitz

All sections of society were affected by the bombing. The upper, middle and working classes were equally at risk.

Bombing helped to change attitudes because civilians helped each other construct shelters and would check to see if families needed help after a raid.

A community spirit and mentality whereby everyone helped each other, developed in Britain. This attitude was to continue after the war and resulted in new laws being passed.