The Cuban Missile Crisis was probably one of the most dangerous periods of the Cold War.

For 13 days in October 1962, the world appeared to stand on the brink of nuclear war.

This is one of the few examples from the Cold War where the two main superpowers actually came into direct confrontation with the other.

Cuba is an island just 90 miles off the coast of Florida.

Until 1959, it was closely allied to the United States under the leadership of the right-wing dictator, General Batista.

There was considerable American investment in Cuba as many American companies had links there.

Americans owned most of the businesses, banks, sugar and tobacco plantations, as well as a large naval base.

The USA was the chief consumer of Cuba’s sugar and tobacco.

In 1959, Batista was overthrown in a revolution led by Fidel Castro. 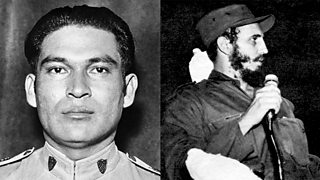 One of Castro’s first moves was to go to the USA to secure support for his new state, but President Eisenhower refused to speak with him.

At the United Nations office in New York, Castro talked with representatives of the Soviet Union, and they offered their support for his new government.

Castro had not been a communist before 1960, but was drawn to communism by the friendship and support offered by Khrushchev and his government.

Castro nationalised all American-owned companies in Cuba, and refused to pay compensation.

The USA now had a pro-communist state ‘in its own backyard’ or in their ‘sphere of influence’ and this was going to really test the American policy of containment.

The struggle for Cuba was part of the worldwide Cold War and a belief that communism was on the move and threatening the USA on its doorstep.