Forecasts show that 30 per cent of land-based bird species could become extinct if temperatures continue to rise. Climate change will also have a negative impact on plants, insect species and on parts of the world's rainforests.

Some butterflies, foxes, and alpine plants have migrated to colder climates or to higher, cooler areas.

Spruce bark beetles have boomed in Alaska thanks to 20 years of warm summers. The insects have chewed up 4 million acres of spruce trees. 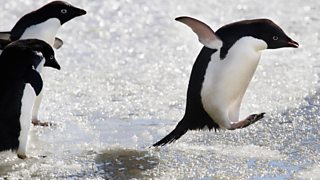 Researchers have tracked the decline of the Adélie penguins in Antarctica, where their numbers have fallen from 32,000 breeding pairs to 11,000 in 30 years.

Species that depend on one another may become out of sync. For example, plants could bloom earlier than their pollinating insects become active.

Ecosystems will change, for example some species will move farther north or become more successful; others won’t be able to move and could become extinct.

Wildlife researchers have found that since the mid-1980s, with less ice on which to live and less fish for food, polar bears have become considerably skinnier. They fear that if sea ice disappears, polar bears could become extinct in the wild.