Murdo is a 46 year old bachelor. Aside from a brief spell on board a fishing boat, he has spent his entire adult life working on the land in a dull concentrated manner.

Initially Murdo is depicted as no more remarkable than any of his neighbours. He lacks confidence, lives alone in frugal self sufficiency and has never in his life done anything unusual.

Murdo’s entire existence stems from his desire to conform and fit in. He carefully sticks to all the unspoken codes and rules of the village, even down the reading the same newspaper and wearing the same clothes.

It emerges that Murdo is unmarried as a result of shyness and a lack of eligible women in the village, rather than through choice. He had never brought himself to propose marriage to anyone.

The one romance in his life to a stout spinster came to nothing because of a meal she prepared for him. Murdo realised that this ferocious meal of salt herring wass an indication that a marriage with this woman would be as unpleasant and joyless as the food she prepared. He receded back to the familiarity and security of his bachelorhood.

Despite Murdo’s outwardly ordinary façade, it becomes evident that he has hidden dreams and aspirations. The newly painted door leads Murdo to confront and acknowledge the poverty of his lifestyle.

He is lonely and unlike his neighbours, feels increasingly repressed and suffocated in this stultifying community where there were times he felt that there was more to life than the village could provide.

He demonstrates romantic sensibilities that suggest he is different from the other villagers. He admits feeling particularly unsettled and unfulfilled on summer nights when the harvest moon was in the sky… and the earth was painted with an unearthly glow and the sea was like a strange volume which none could read except by means of the imagination.

These words are sensitive, intuitive and poetic. They reveal Murdo’s hidden depths while simultaneously implying that he is much more in tune with the eccentric and "odd" Mary than with anyone else in his community. 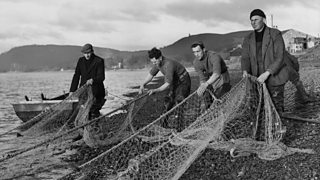 As Murdo finally confronts the unfulfilling nature of his life, he experiences an epiphany revealing that, I have always sought to hide among other people. I agree to whatever anybody tells me to do. If they think I should go to church, I go to church. If they want me to cut peats for them, I do. I have never… been myself.

This moment of clarity provokes him into action and he even admits his hatred of his fisherman’s jersey and wellington boots, affronted by their lack of elegance.

I have always worn these things because everybody else does. I have never had the courage to wear what I wanted to wear, for example a coloured waistcoat and a coloured jacket.

Murdo is no longer content to conform and fit in. As he admires the door he becomes increasingly aware of a building attraction for Mary. Even his realisation that the newly painted door could be provocative and could even result in him being hunted out of the village doesn’t discourage Murdo from his new course. He begins to questions his own identity, asking, if he were a true villager would he like the door so much?

In the uplifting and optimistic conclusion, a transformed Murdo knocks on Mary’s door. This symbolises the beginning of a new and much more enriching chapter of his life where he is finally free from the shackles of conformity.