London in Tudor and Stuart times

There were some improvements in London in the 17th century:

In September 1666, after a hot summer, a fire broke out in a baker's shop. The fire was fanned by a strong wind and destroyed 13,000 houses and 88 churches, including St Paul's Cathedral. Only a few people died, but about 100,000 were made homeless. London had to be rebuilt. Christopher Wren designed the new St Paul's Cathedral that still stands today. The government insisted that new houses were built of bricks and stone. 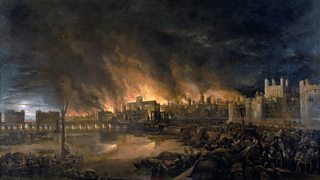 Most people travelled by boat on the River Thames. The ferrymen were called 'wherrymen'.

In 1570, Sir Thomas Gresham opened the Royal Exchange. After Queen Elizabeth I visited it, it became a fashionable shopping mall.

During the Great Frost of 1683–1684, the River Thames was completely frozen for two months and fairs were held on it. 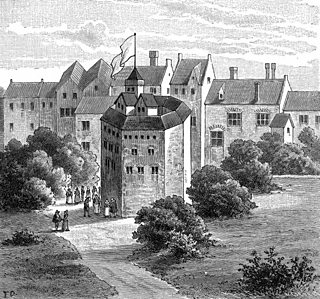 The theatre became popular. The most famous theatre of Tudor times was The Globe, where Shakespeare's plays were performed. Oliver Cromwell banned the theatre – he thought it was sinful. During the reign of Charles II, the plays became sexy and funny. Women were allowed to be actors and one of them, Nell Gwyn, famously became Charles II's mistress.

The heads of executed people were put on spikes at the Tower of London for all to see.