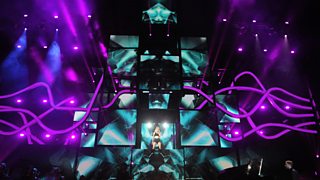 The music industry uses a range of media platforms to promote and market the media texts it produces.

Record labels aim to get information about artists and new releases out to their target audiences, both established fans and new fan bases, to achieve maximum product sales of music releases, concert tickets and merchandise.

The music industry uses music magazines to promote and market performers. Some of these magazines may be for specific subgenres of music such as heavy metal.

A niche audience magazine like Kerrang! could be used to promote and market a heavy metal band.

Music videos are another way of promoting and marketing musical performers. Many music videos of popular mainstream artists have high production values.

Music videos can feature the artists themselves or actors, and usually follow the codes and conventions of two main styles.

The different components in a performance music video are:

Unless the single or album that is being promoted is a live recording, all the video vocal performances will be lip-synched.

A narrative music video will usually: