One of the chief themes of the book is the inevitability of change in the human condition. There are several depictions of ruins which illustrate this.

First is the house of the Kinraddie family, which is left derelict after the last of the family is locked up in an asylum, having gone clean daft. 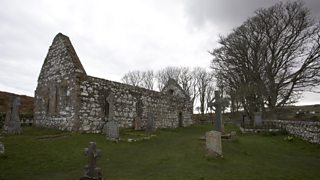 The Meikle House, itself having replaced the castle of Cospatric, the Norman nobleman, crumbled to bits like a cheese, all but two-three rooms which are used by the trustees as offices.

Chris and Ewan's first outing together is to the ruined Dunnottar Castle, whose bloody history has already been mentioned in the Prelude.

Chris is haunted by the horrors of the past: in the dungeons were the mouldering clefts where a prisoner's hands were nailed while they put him to torment. There the Covenanting folk had screamed and died while the gentry dined and danced.

Ewan organizes a trip to the ruined Edzell Castle, saying to Chris: There's nothing to see there but a rickle of stones. But you'll like them fine, no doubt.

Chris enjoys the trip: they climbed and clambered about in the ruins, stone on stone they were crumbling away.

In the garden with its sculptures of strange heraldic beasts, Chris grew chill as she thought about how folk young and blithe as themselves, had once walked and talked and taken their pleasure here, and their play was done and they were gone, they had no name or remembered place.

Even more moving than the great ruins of a past age are the small ruins of their own age: the houses in Kinraddie village that fall derelict after the war.

After Pooty is taken away to the madhouse, Pooty's house began to moulder away, soon the roof went all agley and half fell in, it was fit for neither man nor beast, the thistles and weeds were all over the close.

What once was a home becomes a dreich, cold place. So too Long Rob's Mill House is abandoned after his death. It ends up demeaned, becoming a haunt of courting couples.