Why was Thomas Becket important to Henry II?

Thomas Becket's life and death were remarkable. The son of a wealthy commoner, he rose to become Chancellor, a post given to him by Henry, such was his trust in Becket.

In 1162 he was appointed Archbishop of Canterbury by Henry. He became a strong defender of the Church and the rights of clergymen. This was contrary to the loyalty Henry had expected from Becket. At the time the Church held great wealth and power over monarchs and their people. With the support of the Pope in Rome, Becket represented an even greater power. 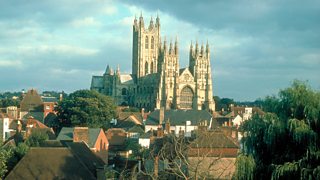 Becket also enjoyed the support of the people. Every village and town had priests and churches that were the centre of all life. Health, holidays, learning and the “gateway to heaven” revolved around devotion to the faith. The Church as guardians of all this, held great power and influence over the people.

Any action against the Church was certain to bring divine punishment against the guilty person and his people - even if that action was taken by a king. The Becket affair was an argument between the king and the Church about power. It ended in notorious circumstances, with Becket beheaded in Canterbury Cathedral in 1170.

Henry viewed Becket as a nuisance, “the turbulent priest”, but Becket has been viewed as an example and martyr to religious people and was canonised almost immediately after his murder. Becket has been the subject of debate ever since his death: was he a saint or a troublemaker?

In 1174 Henry II did penance at Becket's tomb, but by then the damage to Henry's reputation was done.