Act One Scene One

Jo and her mother Helen arrive at their new home. It is a squalid flat in a rundown part of Manchester. Jo is very unhappy about having to move yet again. Helen has a heavy cold and in order to warm herself up she has a glass of whiskey. It is obvious that this is a drink she enjoys.

Jo hates the fact that there is a bare lightbulb in the room and covers it with her scarf. From the conversation between the two women it becomes apparent that Helen enjoys the company of men and Jo refers frequently to her mother’s fancy men.

Jo resents the fact that she has often been left alone so that her mother can enjoy nights out with her male friends. This causes their relationship to be strained. Jo has stolen some flower bulbs from the park and she is eager to plant them, which suggests she would like to brighten up the flat.

Jo is hoping to leave school at Christmas in order to get a job and have money of her own. Helen reminisces about her past when she used to sing in a pub. Helen finds some of Jo’s sketches and compliments her daughter, offering to send her to art school.

Jo seems uninterested however and continues to moan about the flat and their constant need to move around. Peter, a car salesman and a friend of Helen’s, arrives. Helen is shocked that Peter has been able to find them and Jo guesses that their latest move has been because Helen wished to get away from Peter.

Peter and Jo take an immediate dislike to one another. He refers to Jo as Helen’s snotty-nosed daughter. Peter is younger than Helen and despite the fact that she asks him to leave, he insists on staying, even asking her to marry him.

He eventually leaves the flat after Helen refuses to go out with him for a drink, complaining that her cold is too bad. As the two women go to bed Jo admits that she is still afraid of the dark, a result of being left alone for periods of time whilst Helen enjoys nights out with her friends. 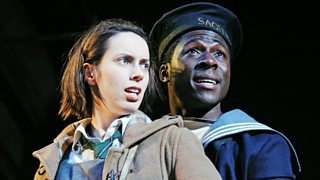 Jo and her boyfriend, a black officer in the navy, are walking in the street. Her boyfriend is referred to as Boy throughout the play although later Jo refers to him as Jimmie. Jo tells her boyfriend that although she enjoys kissing him, she does not want to do it all the time. He offers to marry her when he is next given leave, which will be in six months’ time.

He gives her a ring which she wears on a ribbon tied around her neck as it is a little too big for her and she would not be allowed to wear it in school. Her boyfriend is worried that Helen will not like him because he is black but Jo tells him, No, whatever else she might be, she isn’t prejudiced against colour.

It becomes apparent that her boyfriend does not wish to spend all his time with Jo. He also enjoys going out drinking with his friends and tells her that he cannot see her later that night because of this.

When Jo arrives home, Helen notices the good mood she is in and guesses it is because Jo has met a boy. Jo and Helen have a conversation about the theatre and the cinema, implying that they both take an interest in such matters.

They also discuss Helen’s previous marriage. Helen became pregnant with Jo by a man she was having an affair with. This resulted in her first husband divorcing her. Helen then tells Jo that she intends to get married again.

Peter arrives carrying chocolates and flowers and Jo realises that Peter is the man Helen intends to marry. Jo is unhappy about her mother’s intentions and makes this obvious to Peter. They argue whilst Helen is getting ready to go out and Jo does all she can to put Peter off marrying her mother. When Helen and Peter leave, Jo is upset.

A little later, Jo is joined by her boyfriend who visits her in the flat. He agrees to stay with her over Christmas and, although they are meant to be engaged, Jo is unsure that he will actually return when his leave is over.

In the final part of the scene Helen is back and is preparing to get married. Jo has now left school and Helen is angry when she finds out about her daughter’s engagement. Helen tells Jo she should enjoy herself first and learn from the mistakes she made when she was young, Look, you’re only young. Enjoy your life. Don’t get trapped. Marriage can be hell for a kid.

Helen tells Jo about her father, the man she had a brief affair with. Helen upsets Jo by hinting that there was something wrong with him, He wasn’t an idiot, he was just a bit – retarded, she tells Jo. Jo reacts angrily, wondering how her mother could have given her such a father. However, Helen talks about him with affection before leaving the flat to get married. Once again Jo is left alone to look after herself.