China as a regional and world power

China is one the world's foremost economic powers. With the largest population in the world (1.35 billion), the Chinese economy produces almost one quarter of the world's wealth – GDP US $18.03 trillion (World Bank, 2014). However, China's large population ensured that per capita income in 2014 was only $7,500 (World Bank). This is considerably lower than many other countries in the world.

In 2001 China joined the World Trade Organisation (WTO). This was seen as another important step towards the development of a market economy.

By the end of 2014, in terms of GDP (around $10.3 trillion, World Bank), the Chinese economy was the second largest in the world, after the USA. Some economists think if Chinese economic growth rates remain as high (average 8-10 per cent per annum), China will have the world's largest economy by 2020.

China is the largest trading nation in the world. In 2014, it was the largest exporter ($2.2 trillion) and second largest importer of goods ($1.56 trillion). Over 40 per cent of Chinese manufactured goods are sold overseas.

In recent years, China has developed new multi-billion dollar trade deals significantly increasing its influence in parts of South America and Africa. Chinese banks and investment companies have also invested heavily buying up businesses from across the world. 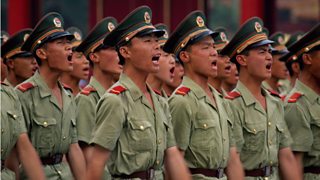 China is an established military power. Although it lags behind the US in defence spending (2 per cent) and technological expertise, China is a nuclear power, has the world's largest army (2.2 million personnel) and is a permanent member of the United Nations Security Council.

In 2003 China became only the third country in the world to put a person into space. 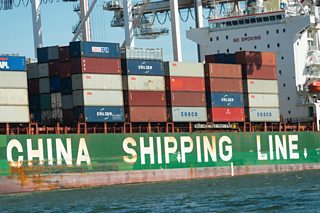 A container ship from China Shipping Line in Australia

China has been accused of unfairly protecting its industries from global competition. This is against WTO rules. The USA claims that China unfairly blocks US exports and is keeping the value of the Chinese currency (the yuan) artificially low. This helps boost China's exports but makes imports to China more expensive. China, denies these claims.

There have also been disagreements between China and the US over 'Chinese state-sponsored cyber-espionage' (the stealing of intellectual property rights for commercial gain). At a meeting in September 2015 between Presidents Xi and Obama in Washington, talks in relation to 'cyber-espionage' highlighted sharp divisions between the leaders of the two countries.

US-China relations have been strained by disagreements in other areas as well as trade. US weapon sales to Taiwan and President Obama's meeting with Tibetan leader the Dalai Lama have caused tension between Washington and Beijing. In November 2013, the US and Japan faced down a Chinese no-fly zone in the Yellow Sea. This, along with China's failure to prevent the piracy of many manufactured goods have strained US-Chinese relations.

More recently, in 2018, President Trump introduced $200 billion in trade tariffs with China. The Chinese responded in kind with tariffs on US products, sparking fears in financial markets of a long-running trade war.