All rabbis (Jewish teachers) had disciples. People at the time of Jesus chose which rabbis to follow, listen to and learn from.

Jesus was a different sort of rabbi as he chose his disciples, rather than being chosen by them.

The first four disciples that Jesus chose were two sets of brothers who were all fishermen.

Jesus went along the shores of Lake Galilee. Seeing Andrew and Simon (Peter) he called them to discipleship. Jesus said he would teach them how to catch people, meaning that he would show them how to bring people back to God. 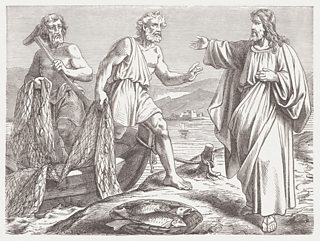 An illustration of Jesus calling Peter and Andrew

Jesus then saw James and John in the boat with their father Zebedee. They responded instantly to his call and left everything, including their father, to follow Jesus.

The next disciple that Jesus called was Levi (Matthew). He was a tax collector who was sitting at his booth. Tax collectors were hated by the Jews. They were dishonest and were also seen as traitors because they worked for the Romans.

Jesus’ actions would have horrified many people, including the religious leaders. Tax collectors were outcasts due to their sinful ways, yet Jesus calls one to be a disciple. Levi also responded immediately to Jesus’ call and they celebrated with a meal at Levi’s house. Levi’s friends, many of whom were tax collectors, were also there.

This angered the Jewish religious leaders because Jewish law forbade Jews to associate with outcasts like tax collectors, who were seen as unclean. Jesus went a step further by sharing a meal with these people, so he was breaking ritual laws.

Jesus’ words are very powerful when he explains that he has come to help the outcasts in society, and not follow religious laws blindly. “Those who are well have no need of a doctor, but those who are sick. I have come to call not the righteous but sinners.”