Jesus was leaving Jericho, followed by a large crowd, on his way to Jerusalem when he came across a blind beggar called Bartimaeus.

The crowd was probably on their way to Jerusalem for Passover. This event took place a week before Jesus’ death, so it is the last miracle that Mark records in his gospel.

Bartimaeus calls out “Jesus, Son of David. Take pity on me!”

Bartimaeus’ words show his faith in Jesus as the Messiah. Jews believed that the Messiah would be a descendant of King David.

Jewish people also believed that illness and disability were a punishment from God because the person had committed sins. Bartimaeus, a blind beggar, was told by the crowd to be quiet. In their opinion, he did not deserve to have Jesus listen to him.

Bartimaeus refused to be quiet and shouted all the louder as he wanted to meet Jesus. Jesus on hearing his insistence called him over and asked him what he wanted. Bartimaeus asked Jesus to restore his sight. Jesus heals him and says, “Your faith has made you well.” 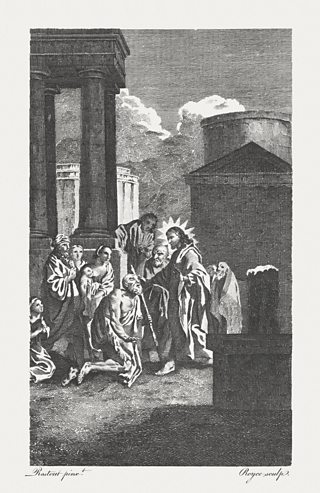 An illustration of Jesus restoring sight to Bartimaeus, published 1774

Bartimaeus is an important character as his response to Jesus’ healing is an example for us to follow. On being cured, Bartimaeus immediately followed Jesus. It is thought that he was in Jesus’ group of followers who went to Jerusalem and were with him before he died.

In this story we see the end of the messianic secret. Jesus does not tell Bartimaeus to be quiet because he wants his identity as Messiah to be known as he heads into Jerusalem to face his imminent death.