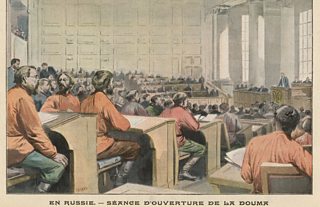 The opening session of the first Duma

Four Dumas were held between 1906 and 1914. The first two featured strong opposition to Tsarism and quickly dissolved. The next two were less radical and more flexible as a result of changes to the voting system.

The first Duma was established in May 1906, after the announcement of the Fundamental Laws.

It consisted mainly of Kadets and SRs. Hence, it demanded further political reform, including land reform and the release of political prisoners. This was denied by the Tsar.

It lasted for just over two months before it was dissolved for passing a vote of ‘no confidence’ in Prime Minister Ivan Goremykin.

The second Duma was established in February 1907. Following the dissolving of the first Duma, many Kadets were involved in writing the Vyborg Appeal. This criticised the government and demanded the non-payment of taxes.

In response, these Kadets were made inelegible to vote. This greatly reduced the power of the Kadets.

Liberal Octoberists (those who agreed with the October Manifesto) had more influence as did SRs, Bolsheviks and Mensheviks. The second Duma lasted for five months. It was dissolved when members began promoting revolutionary organisations within the army. 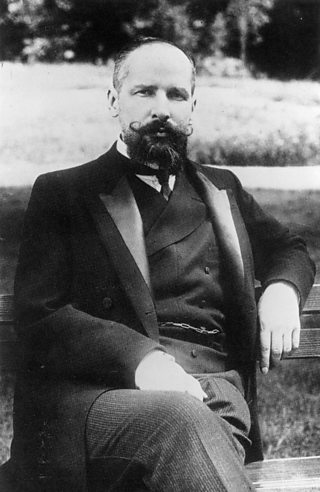 Established in 1907, this Duma was intended to be much more supportive of the Tsar.

Arrangements had been made for landowners to have more voting power. This meant only the most affluent third of the population were able to vote in the election.

The resulting Duma was less radical and more favourable to the government. Prime Minister Pyotr Stolypin was able to pass considerable land reform. It lasted until mid-1912.

Established in November 1912, the fourth Duma comprised mainly Octoberists on one side and socialists on the other, This made decision-making increasingly difficult.

Both groups found it impossible to unite in order to make progress. The Duma was suspended in 1915, by which time Russia was committed to fighting the Austrians and Germans in World War One.