Reasons for US involvement in Vietnam

Vietnam is a country in south-east Asia. There were a number of long-term and short-term reasons to explain why the USA became involved in Vietnam in the late 1950s.

Before World War Two Vietnam had been part of the French Empire.

During World War Two it had been invaded by Japan. Ho Chi Minh was the leader of the Vietminh, a resistance army which fought for Vietnamese independence.

After World War Two Ho Chi Minh captured Hanoi in 1945 and declared Vietnam independent. The French tried to take control again, but this was unpopular with the people. They were defeated by the Vietminh at Dien Bien Phu in 1954.

Peace was discussed at Geneva in 1954 and the Treaty of Geneva agreed that the French would leave Vietnam and the country would be split along the 17th Parallel until elections could be held.

The elections were never held and the country remained divided: 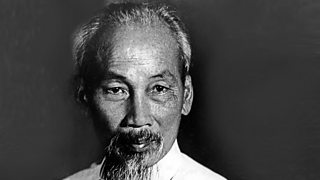 The Vietminh wanted to unite the country under communist leader Ho Chi Minh. Many of the South Vietnamese people supported Ho Chi Minh as they were unhappy with Ngo Dinh Diem.

War broke out between the North and South. From 1958 onwards, the South came under increasing attacks from communists in South Vietnam itself. They were called the National Liberation Front (NLF).

This was the belief that if one country fell to communism, it was likely that the neighbouring one would also fall – similar to a row of dominoes falling over. This had happened in Eastern Europe after 1945. China had become communist in 1949 and communists were in control of North Vietnam.

The USA was afraid that communism would spread to South Vietnam and then the rest of Asia. It decided to send money, supplies and military advisers to help the South Vietnamese Government.

Diem was a corrupt leader who refused to give peasants land. He did not like Buddhism and treated the mainly Buddhist population badly. As a result, much of South Vietnam’s population was rebelling against him. The peasants wanted communism and supported the Vietminh and the NLF.

In 1963, President John F Kennedy sent 16,000 military ‘advisers’ to help the South Vietnamese army. Diem’s Government was overthrown. After this, there was no strong capitalist government in control of the South.

On 2nd August 1964, North Vietnamese boats attacked a US Navy destroyer, the USS Maddox, patrolling in the Gulf of Tonkin.

Another attack on the Maddox was reported to have taken place on 4th August. Weather coditions were poor and there was doubt as to whether a real attack had taken place.

However in Washington the attack was presented as a fact and the incident gave the USA the excuse it needed to escalate the war.

US Secretary of Defence, Robert McNamara, withheld information about US support of South Vietnamese raids on North Vietnamese radar stations and other targets in the period leading up to the attack. Other evidence that suggested the second attack had not occurred was not passed on to the US Congress.

Gulf of Tonkin Resolution - US Congress gave President Lyndon Johnson permission to wage war on North Vietnam. The first major contingent of US Marines arrived in 1965.

For the next ten years the USA's involvement increased. By 1968 over half a million American troops were in Vietnam and the war was costing $77 billion a year.