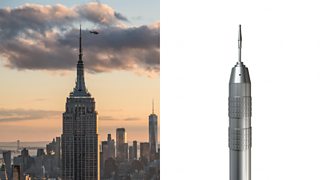 This morning I watched from here

MacCaig opens the poem at a specific time, just as the title puts us in a specific place. Together with the use of real landmarks, this makes the poem feel like a genuine, real experience. This creates a sense of immediacy that is consolidated later in the opening stanza with But now. With these two quotes, he suggests that the themes of the poem need to be discussed and are relevant to the time of writing.

A helicopter skirting like a damaged insect/ the Empire State Building

In the second line, MacCaig introduces images of modern technology but immediately criticises them.

A simile compares the helicopter to an insect, suggesting that it is insignificant - it appears small among the buildings. Insect also suggest something that buzzes around and is annoying. Not only is it annoying, but it seems damaged. This modern invention is like an inferior copy of nature. A helicopter may commonly be associated with wealth, and MacCaig may be making a subtle social comment here: perhaps it is society that is ‘damaged’ by the ever-increasing pursuit of technological and material wealth. With this comparison, MacCaig poses questions about the worth of certain technological achievements.

A metaphor states that the Empire State Building (the city’s tallest landmark at the time) is a jumbo sized dentist’s drill. This is a humorous image – what use would a dentist have with a drill of this size? MacCaig suggests that a building of this size is pointless. He seems to criticise an (American) view that ‘bigger is better’. On a more aesthetic level, MacCaig is clearly showing his disdain towards the appearance of the building.

The dentist drill has connotations of pain and suffering. Again, he may be making a deeper point regarding the inequality of society and the suffering of groups of people who are left behind by progress. It can also be read as a tool, or weapon, that is used in the fight against decay. This is a bright, modern image that is soon surrounded by darkness.

Towards the end of Stanza One, the focus shifts to night-time New York. But acts as an obvious turning point around which the time shifts from morning to the middle of the night. The mood of the poem changes to something more solemn.

While midnight literally refers to a time, it also metaphorically introduces the idea of the darkness and the unknown and, consequently, fear. This idea of fear and conflict is re-enforced with foreign places and uncivilised darkness later in the stanza. This could suggest that modern America is in conflict with anything that is “foreign” or that doesn’t tie in with its view of what is civilised.

Conflict is extended when MacCaig writes that the darkness is being shot at by a million lit windows. This brings to mind the USA’s close association with guns, such as the place of guns in taming the Wild West. The image suggests the buildings of the city in battle with the surrounding darkness. Here, darkness, with its associations of evil and the unknown, is in battle with artificial light, alongside its connotations of life, knowledge and progress. This raises questions about humanity’s ability to use its own inventions (electric light in man-made buildings), combat the inevitable return of night and darkness, and possibly humankind’s most instinctive, perhaps destructive, desires.

MacCaig ends the stanza suggesting that shots are being fired upwards, just as the skyscrapers point up to the sky. However in Stanza Two he goes on to suggest that violence is occurring elsewhere, down in the streets below. Acrosses, with its inclusion of the word “cross” carries a religious connotation. The image suggests the Western Christian image of good fighting evil and darkness.