Many of those conscription into the army had come from the Russian peasantry. By 1916 a third had been injured.

As the Russian Army had retreated from Poland and Lithuania in 1915, they had employed a ‘scorched earth’ policy, destroying a great deal of farmland. Peasant livelihoods were obliterated.

Shortages in grain during the war resulted in many of the poorer land workers hoarding what they produced. 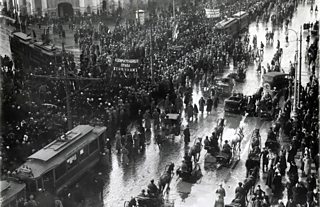 Women take to the streets of Petrograd

The ‘war economy’ had resulted in a steep increase of workers in the cities. City administrations faced added pressure to provide housing and services.

Unemployment rose in industries that were not directly contributing to the war effort (these factories could not maintain a supply of raw materials).

Living conditions deteriorated, especially as a result of shortages in the shops. These were caused by:

There was a severe lack of food in Moscow and, in 1917, Petrograd only received half of the grain required to feed its citizens. These shortages contributed to social unrest.

In January 1917, in commemoration of Bloody Sunday, 140 000 workers went on strike in Petrograd. In February, rioting broke out in the city. Crowds attacked bakeries in a desperate search for bread. This was partially in response to the announcement of bread rationing.

In the following days, strikes and demonstrations took place. Strikers from the Putilov Engineering Plantith joined the crowds at the celebration of International Women’s Day. As the number of people on the streets of Petrograd increased, soldiers refused orders to fire on the crowds. Instead they began to join in the protests.

The Petrograd Soviet was established and issued Order #1, announcing that soldiers had the right to elect their own officers.

The fall of the Tsar

When informed of these events, Nicholas II dismissed it as a "hooligan movement" which would soon be over. Even as his regime met total collapse, the Tsar still showed his inability to face reality.

Nicholas made an attempt to return from the war front to the capital, Petrograd, and reclaim his authority. But in late February revolutionaries diverted the train to Pskov. Isolated and powerless without the support of the army, his reign as Tsar was over - the only option now was abdication.

Nicholas named his brother, the Grand Duke Michael, as his successor. Michael lacked the support of the people or the military. He refused the position. With that, the Romanov dynasty surrendered control of Russia.