Certain texts, especially non-fiction, follow genre conventions regarding layout. To be effective they need to be laid out in ways that capture interest and draw attention to important information, make information clear, or help the reader find what they want to read.

Scan over the following text and look for at least four things the writer has done to try to make it easier to read and consider which parts of the article catch your eye first.

Haunted by a Fiddler

Access:Red Mount Chapel is on a mound on "The Walks" in the park.

Red Mount Chapel is a superb example of the Gothic style in architecture and even boasts its own musical ghost!

Built in 1485 at the time of Henry VII, the first Tudor king, the chapel was a stopping-off place for pilgrims on their way to the shrine at Walsingham via the port of King's Lynn. Octagonal in shape, it is very small, and has three floors. The top floor is a chapel with ‘fan tracery’ much like that in Cambridge university’s King's College. 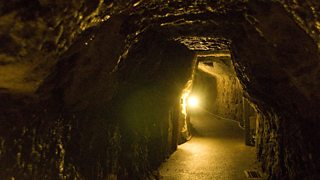 Underneath the chapel building there is reputed to be a long tunnel (not unusual), running to the town of Castle Rising - a distance of 18km/12 miles (very unusual). An unfortunate, drunken fiddler once decided to explore the dark passageway carrying his instrument, his dog and his pint! He never reached the end of the tunnel, wherever it went, but his spirit is said to remain and to be heard on occasions playing his tunes and singing, accompanied by the whining of his poor dog!

Places of Interest in the Neighbourhood:

Did you spot them? Here are the techniques that the writer has used: