Minorities and the political process

In 2012, around 64% of white Americans voted and for the first time a greater percentage of African Americans voted (66.2%0. However, only 48% of Hispanics and 47% of Asians voted.

Minority representation in the US Cabinet

President Obama’s Cabinet was the most diverse administration in US history. Apart from President Obama, there were people from ethnic minority backgrounds in senior positions in the US Cabinet including:

In 2018 President Trump's former director of communications for the White House Office of Public Liaison Omarosa Manigault Newman left her post and complained about the lack of dviversity in Trump's cabinet – she had been the only African-American in a senior position at the White House. Overwhelmingly, Trump's senior advisors are white, male and conservative. The Washington Post declared Trump's cabinet as the least diverse in 30 years.

Minorities and the Political Process – the Supreme Court and elsewhere 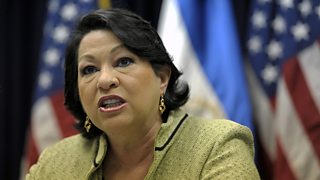 There have only ever been four black state governors including Massachusetts' Deval Patrick. There are two Hispanic governors – Susana Martinez of New Mexico and Brian Sandoval of Nevada, as well as two Indian-Americans, Louisiana Governor 'Bobby' Jindal and Nikki Haley of South Carolina.

There are many people from ethnic minority groups who are city mayors including Michael Hancock of Denver, the city's second black mayor. Overall, minorities remain under-represented in US politics.

The US Supreme Court is comprised of nine justices. In 2016, two were from minority groups – Judge Clarence Thomas and Judge Sonia Sotomayor.
Move on to Test