Heat can be transferred from one place to another by convection.

Liquids and gases are fluids because they can be made to flow. The particles in these fluids can move from place to place. Convection occurs when particles with a lot of heat energy in a liquid or gas move and take the place of particles with less heat energy.

Heat energy is transferred from hot places to cooler places by convection. 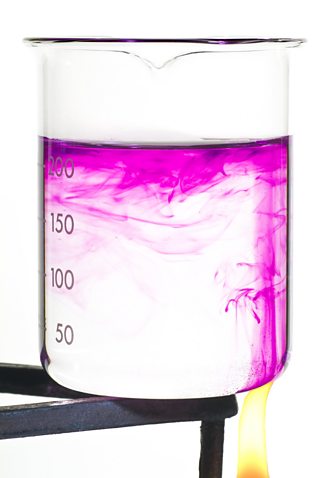 Liquids and gases expand when they are heated.

The denser cold liquid or gas falls into the warm areas.

In this way, convection currents that transfer heat from place to place are set up.

Convection currents can be seen in lava lamps. The wax inside the lamp warms up, becomes less dense than the liquid and so rises.

When it rises, it cools and becomes denser again, so it sinks. This same effect can be seen by putting a crystal of potassium permanganate in a beaker of water and gently heating it.

Convection explains why hot air balloons rise, and also why it is often hotter in the lofts of houses than downstairs.

As well as these examples, convection is seen on a much bigger scale in our weather and ocean currents.