The play opens in 1936 in Italy at night. A mourning bell is heard in the background. Wearing a black armband to mark the death of his wife, Luigi hands his baby daughter to his sister-in-law Rosinella.

It is clear that Luigi is unable to take care of Lucia and therefore has placed her in the care of Rosinella and Massimo.

The scene ends with Massimo leading Rosinella away with the baby in her arms.

Five-year old Lucia shows off her new party dress to Massimo and Rosinella. It is clear they adore Lucia as they are fussing over her with delight.

The dialogue shows that Rosinella is reluctant to spend money on herself. Instead she spends money on her family. Massimo and Rosinella share a loving relationship as Massimo smiles with great affection at her generosity.

Lucia refuses to take her dress off. Massimo and Rosinella give in to Lucia’s demands. Lucia controls her crying and we see her ability to manipulate her guardians.

Massimo’s brother Franco enters the scene. It is clear that there is family tension after Massimo left his father’s shop to set up his own. Franco resents being stuck in his father’s shop. He is frustrated by the lack of job opportunities and the hold his father has over him.

Franco then tells Rosinella he has a date with Bridget Devlin, a Scottish girl. Rosinella disapproves of the Devlin family as she believes they can’t look after their eight children. Rosinella believes it her right as an Italian to have a big family but she has been unable to conceive.

The characters of Hughie and Bridget are introduced. Franco and Bridget are in a relationship and it is clear they are in love. Franco gives Bridget a good luck charm but she is so poor that she has no other jewellery to attach it to.

Lucia refuses to speak English and it is clear she is experiencing difficulties at school. When Massimo and Rosinella try to persuade her to speak English she swears at them. Massimo slaps her and is in turn slapped by Rosinella.

Massimo gives Hughie a job in the shop. He encourages him to speak English with Lucia. Lucia and Hughie are suspicious of each other but share a bottle of ginger and spy on Franco and Bridget dancing. Bridget resists entering a physical relationship with Franco. He talks about escaping from working in his father’s shop.

Andy Devlin (father to Hughie and Bridget) is killed in a mine explosion. Hughie struggles with his emotions. Lucia attempts to comfort Hughie and encourages him to cry. She turns on her tears and cries along with him.

Rosinella expresses displeasure at Franco and Bridget’s relationship. She suspects Bridget is using her father’s death to gain Franco’s sympathy. Massimo worries about how the start of World War Two will affect them. Rosinella hides her own concern.

Franco joins the British army in an attempt to escape life in his father’s shop. He and Massimo argue. Massimo suggests that Franco doesn’t have to fight as he is Italian. But Franco insists he was born and brought up in Scotland and that he is British.

Franco and Bridget have sex. Bridget reveals she is worried about losing him.

Franco goes off to war. Rosinella thinks Bridget is somehow responsible. Massimo is frightened about how Italy joining the war will affect them. He suggests moving back to Italy but Rosinella refuses.

A desperate Bridget asks Rosinella how to get in touch with Franco. Rosinella tells her that Franco doesn’t love her and that she should move on with her life.

Hughie and Lucia go off to work together with Massimo’s ice-cream barrow. They argue about who will push it until Lucia gets her way. A desperate Bridget asks to borrow money from Massimo. He gives it to her without question.

Bridget reassures Massimo that although Italy is at war against Scotland he has nothing to fear, as he is well liked.

He reflects on his father’s house in Italy. It is extremely basic but in spite of this he wishes he was there. This shows Massimo is worried about the threat that war poses to his.

The shop is attacked by an angry mob shouting anti-Italian slogans. The mob move on when the police arrive. Rather than protecting the Pedreschis, they arrest Massimo as an enemy alien. 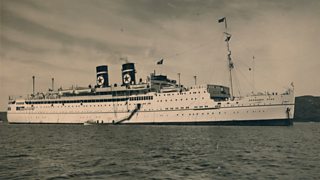 The Arandora Star was sunk whilst carrying Italian prisoners of war

Lucia and Hughie act out a classroom scene. It is clear that Lucia is experiencing prejudice at school. They help read the newspaper for Rosinella, who is illiterate. The main story is about Italian prisoners killed when the ship carrying them was torpedoed.

Massimo relates the experience of his detention. Initially he was separated from his father but then briefly reunited. He reveals that his father died when the Arandora Star sank. He is transported to Canada.

The scene opens in Pedreschi’s ginger store in 1943. Hughie and Lucia are now nine years old. They plan to become blood-brothers to symbolise their close friendship but Lucia is worried about the pain.

Instead, they mix their spit in a bottle of ginger and then take a drink. Hughie and Lucia declare their bond as ginger-sister and brother as everlasting. The mood is solemn and there is A reverent hush to mark the significance of the occasion.

Lucia worries that Massimo and Franco will never return. She reveals that Rosinella cries all the time, to which Hughie responds, That’s funny. So does our Bridget.

This highlights the innocence of Hughie and Lucia in contrast to the knowing adults. They don’t fully understand the reality and impact of war.

Franco has been killed in the war. Bridget reads Rosinella the last letter he wrote. In it he passes on his love to his family. Rosinella assumes he wrote to Bridget rather than her because she cannot read.

Rosinella tells Lucia about her early relationship with Massimo. She reveals she married him out of love. She avoided an arranged marriage by spending a night up a tree with him. Massimo returns, reuniting the family.