The Holy Trinity is one of the greatest mysteries of the Catholic faith, and is an attempt to describe the mysterious nature of God.

The Trinity refers to the idea that God is one, but can be experienced in three different Persons. The word ‘trinity’ comes from the word ‘tri’ meaning ‘three’ and ‘unity’ meaning ‘one’.

Catholics believe that there are three distinct Persons to this one God and that these three Persons form a unity. This belief is called the doctrine of the Trinity:

A useful way of understanding the Trinity is by thinking of how H2O comes in three forms: liquid, ice and steam. These different forms are still all H2O, just like the Father, Son and Holy Spirit are different but still God.

Christians refer to God as the Father. God the Father is the creator of all things. He is the creator ex nihlio. This means that God created the universe and all things in it out of nothing. This belief was explained and explored by St Augustine, a prominent theologian and philosopher in the early Christian Church, in his Confession XII, 7; …create something, and that out of nothing. The belief is that before the universe there was nothing and everything in it is dependent on God.

God is also viewed as a loving father. This means that he cares and loves humanity, as a father loves his son. This is shown in the Parable of the Prodigal Son. (Luke 15:11-32)

In the parable, despite the son having squandered his early inheritance, the father still welcomes him home with open arms and a celebration.In the same way, God welcomes back those who have sinned and now seek to be reconciled with him. 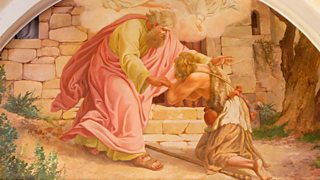 The prodigal son returns to his forgiving father

God is also known as the father of Jesus Christ, as Jesus claimed to have a special relationship with God.

God the Son refers to Jesus Christ, the Son of God. For Catholics, this is Jesus as God in human form, who was sent to save humanity. He was sacrificed for the sins of humankind, which allows them to be reunited with God after death. Jesus Christ is the incarnation of God on Earth - The Word became flesh and made his dwelling among us (John 1:14).

Catholics believe that the Son was present at the creation of the universe, but wasn’t in his human form at this stage. God chose to reveal himself as a human being in order to spread his teaching, to show how life should be lived, and to represent humanity for their salvation. 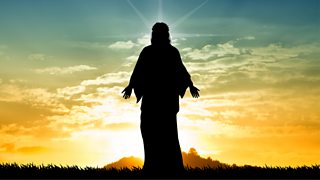 Jesus Christ was both fully divine and fully human. This means he was fully God, as well as fully human.

The Holy Spirit is the power of God at work on the Earth. In the scriptures it is often depicted as wind, fire or in the form of a dove. It is through the power and workings of the Holy Spirit that God is known today and how Catholics can know what God wants them to do.

All this I have spoken while still with you. But the Advocate, the Holy Spirit, whom the Father will send in my name, will teach you all things and will remind you of everything I have said to you.John 14:25-26

It is also through the Holy Spirit that Catholics receive grace and gifts from God, such as faithfulness and self-control:

...the fruit of the Spirit is love, joy, peace, forbearance, kindness, goodness, faithfulness, gentleness and self-control.Galatians 5:22-23

The Holy Spirit is connected with life and the soul. When Adam was created, God breathed life into him. Catholics also believe that it was through the Holy Spirit that Mary became pregnant with Jesus.

Catholics believe that the Holy Spirit continues to act through people, producing characteristics which show a true Christian. 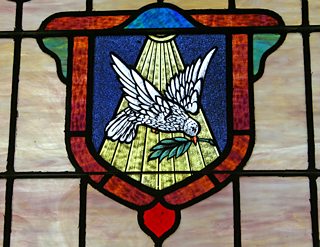 A dove, representing the Holy Spirit, can often be seen in church windows