Carbon dioxide, carbon monoxide and soot are not the only atmospheric pollutants produced by the combustion of hydrocarbon fuels. Sulfur dioxide and oxides of nitrogen may be produced too.

Many hydrocarbon fuels naturally contain sulfur impurities. When the fuels are burned, the sulfur oxidises to form sulfur dioxide gas:

Sulfur dioxide dissolves in water in the clouds and reacts with oxygen in the air to form sulfuric acid. Overall:

This falls from the clouds in acid rain.

Explain why sulfur dioxide is oxidised when it forms sulfuric acid.

It reacts with oxygen and gains oxygen in the reaction.

Acid rain damages the natural and built environment. For example, it: 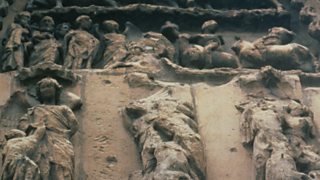 These statues have been damaged by acid rain

High temperatures are reached when fuels are burned in engines. At these high temperatures, nitrogen and oxygen from the air can react together to produce oxides of nitrogen. For example:

Nitrogen oxide gas can be oxidised further in air to produce nitrogen dioxide gas, NO2.

These two oxides of nitrogen are together called NOx. They are atmospheric pollutants. They can react in sunlight with other substances to produce a hazy, harmful smog.

Nitrogen dioxide is toxic. It can cause bronchitis and other lung diseases. It also dissolves in water in the clouds, forming an acidic solution that contributes to acid rain.

Write a balanced equation for the reaction between nitrogen monoxide and oxide, forming nitrogen dioxide. Include state symbols in your answer.