The social deprivation and gender issues lead to many tensions in the play. Initially we see conflict between the sisters, Maggie and Lily, in the way that they regard men. They comment on each other’s circumstances in Act I:

Lily: Livin in a slum and slaving efter a uselees man an his greetin weans. 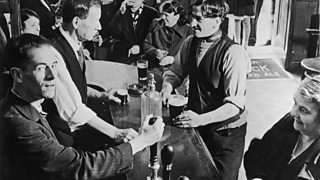 Maggie does not like men who drink in the pub

Maggie’s disapproval is conveyed by the phrase hulkin brutes, which suggests the men in the pub are ugly and bestial. Lily describes Maggie’s household as a slum, implying it is run down and unfit for habitation, slavin also suggests the thankless work Maggie puts in. However, the tension here is borne out of concern.

Lily loves her sister and she wants to see her better off. It is significant therefore, that she is present in the final scene when Maggie finally asserts her control.

The conflicting attitudes between the generations are also displayed. When we first meet Jenny she is rebelling and fighting for a better chance at life.

Her sluttish attire, liberal behaviour and lack of ‘duty’ towards her family shocks her parents, particularly her father, and an intense conflict ensues.

Jenny is John’s favourite and he can’t stand to see her play the role of the teenage delinquent. What makes him even more angry, however, is the guilt he feels at not having provided for his daughter as he should have. Jenny knows this:

Ye needna worry! When I leave this rotten pig-sty I’m no comin back. There’s ither things in life – so ye’d better hang an tae yer job this time. If ye can!

John cannot handle this forceful attack on his pride, so he hits her. The stage directions describe the two facing each other in frozen silence, which conveys their shock at John’s violence, but also a sense of the determination on both sides not to back down.

This tension lasts until the end of the play where there’s a glimmer of reconciliation when Jenny takes her father’s hand and holds it in an act of contrition.

Another physical conflict in the play takes place between Alec and Isa. Their relationship is a destructive one. Isa is fed up with her husband and Alec follows her around dog-like.

Due to Alec’s feeble character, his frustrations are repressed until they reach breaking point. After being provoked by her threat to leave him for another man, he attacks Isa - You say Peter Robb tae me again an I’ll kill ye! I wull! I’ll kill ye! Alec’s weak nature prevents him from causing Isa any real harm, but his violent temperament is clear.

Finally, there is a metaphorical battle that takes place between the characters and the harshness of their predicament. Each day is a struggle and can only be taken one day at a time.

Fighting against disease and hardship is the priority of many of the characters who are forced to look out for themselves:

Only Lily, John and Maggie do not put their own needs first, especially Maggie. Instead she acts as a mother fighting for all of them until, in the closing scene of the play, she finally fights for herself.