In contrast to passive men, we have a set of active women in this play:

They are all busy doing, while the men are often idle.

Words like feeble, wilting, morosely, pleading are frequently used to describe Alec while John is portrayed several times with his head in his hands or with his head bent. Alec spends his days pining for Isa’s attention, while his father waits for work – neither are particularly admirable or impressive pursuits.

The world presented in Stewart’s play therefore, is not one run by men, but one run by women – from which one woman rises up to take more authority than a 1947 audience would expect. 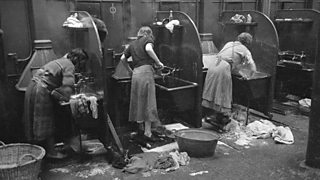 Women were expected to do laundry and housekeeping

It was undoubtedly the woman’s job to organise the home at that time and an earlier audience would not be surprised to hear John dismiss the idea of tidying, even after Maggie has been out cleaning all day to earn money.

However, the decisions were still made by the men as heads of the household. Act III therefore, brings in an interesting twist which would have been controversial in its day. In the stage directions Maggie rises and takes control, leaving John to sink into a chair.

Her tone is forceful and uncharacteristic for a woman. We wull be happy! she declares and there is no arguing with her.

Maggie later apologises for humiliating John by exposing her husband’s sexual appetite, but she still remains resolute – I can manage him.. she repeats like a mantra at the end of the play, before she envisages her positive future - Four rooms… an a park forbye!

She repeats the expression four rooms three times as if to highlight the space she will have to be free, unrestricted by the control of her husband.