The appeal of the Nazis 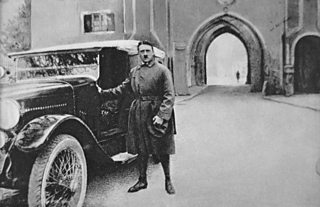 Adolf Hitler was disillusioned and bitter after World War One. He felt the war had ended too soon and the Weimar Republic had sold Germany out by agreeing to the Treaty of Versailles.

In 1919 he joined a small political party in Munich, known as the German Workers' Party. Before long he was its leader.

He changed the party name to the National Socialist German Workers' Party (NSDAP). This became known as the Nazi party.

The Nazi party’s policies were deliberately vague so they might appeal to as many people as possible. People of both right and moderate-left wing politics joined because they agreed with at least one of their policies: 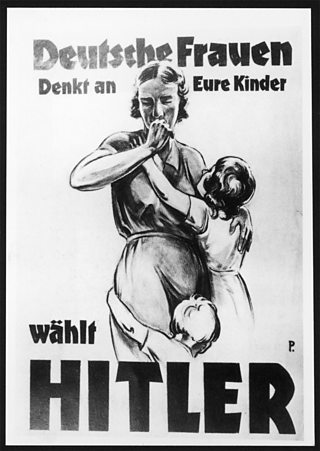 Propaganda is information spread to promote a political cause and to persuade people of a certain point of view.

Information about what the Nazis believed in and who they blamed for Germany’s dire situation was effectively spread by the Party’s propaganda machine. Hitler put Josef Goebbels in charge of Nazi propaganda.

Methods of campaigning that the Nazis used in the 1920s included

The Nazis used simple slogans to introduce their ideas and to make them appeal to the ordinary people of Germany.

At the same time Goebbels prevented those who opposed Nazi policies from expressing their views. This helped ensure only Nazi messages got across to the public.

The Nazi Party was extremely organised. This meant they were able to convey policies to a wide range of people, while appearing to be competent and able to run the country:

When social unrest increased, after benefits were cut in 1930, Hitler used fear of Communism to get support from indutrialists. Alfred Hugenberg, an industrialist who owned a chain of newspapers ,and Fritz Thyssen, a steel manufacturer, along with other industrialists formed the Harzburg Front.

The Harzburg Front helped finance the Nazi election campaigns in 1932-1933. This ensured the Communists were defeated.