Germany was already in financial trouble. The reparations that they were forced to pay as part of the Treaty of Versailles were taking their toll. The economic effects of World War One and the depression made matters worse. Germany was heading for economic disaster.

The French invasion of the Ruhr

In 1922, the Weimar Government stated that it would not be able to pay the next 3 years’ reparation instalments as a result of economic hardship. However, the French thought they were bluffing:

Hyperinflation and its results 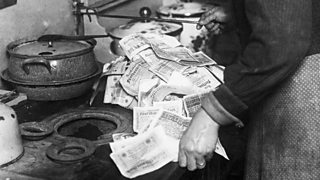 A German woman uses money as fuel for her stove

Hyperinflation was caused by the sudden flood of paper money into the economy on top of the general strike, combined with a weak economy ruined by the war:

The hyperinflation of the early 1920s was brought under control by the work of the Chancellor Gustav Stresemann. In 1923 he organised the Great Coalition of moderate, pro-democracy parties in the Reichstag. Under Stresemann's guidance, the government was able to work together. They called off the strike, persuaded the French to leave the Ruhr and even got the rest of the world to allow Germany to join the League of Nations in 1926.

He introduced a new currency called the Rentenmark which restored confidence in the economy.

Stresemann worked with the US budget director Charles Dawes to sort out the economy. Under Dawes’ advice, theGerman Reichsbank was reformed and the old money was called in and burned. This ended the hyperinflation. 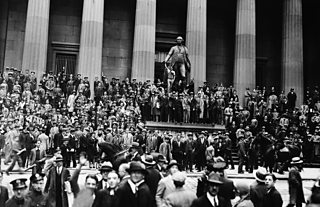 Crowds gather outside Wall Street after the US stock market crash

When the American Stock Exchange (Wall Street) crashed in 1929, the US economy went into meltdown. American banks now demanded the return of the loans they had made to other countries including Germany.

German banks and factories were forced to close and unemployment increased at an alarming rate.

The German economy was left in chaos. Industries failed and unemployment rose to 6 million. Social unrest followed as people starved.

The hyperinflation of the early 1920s resulted in a lack of confidence in the government's control of the economy. This gave the Nazis effective propaganda material.