The Austrian Empire was extremely powerful in Europe. It was greatly opposed to unification of the German lands: 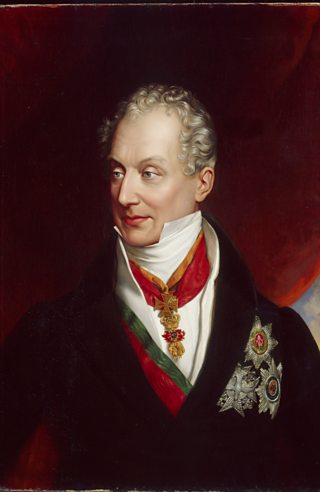 Under the leadership of Prince Klemens Wenzel von Metternich, the Austrians had been able to keep popular demand for liberalism and unification suppressed. In particular, student groups were suppressed.

Nationalistic student societies, Burschenschaften, had grown in size and strength since the first group was founded in 1815. The actions of some Burschenschaften had grown increasingly violent. In 1817 an effigy of Metternich was burned in Wartburg. In March 1819, a German writer working for the Russian Tsar was assassinated by a student.

In response, the German Confederation met at Carlsbad. Metternich persuaded the German states to agree to the suppression of liberal and nationalist expression. In Sptember 1819, the Carlsbad Decrees were introduced. These allowed states to:

Austrian military power kept Prussia at bay in the mid-1800s.

Austria and Prussia had come close to conflict over how to respond to rebellion in Hesse-Cassel. The state had been a Prussian ally, but when its leader, Elector Frederick William appealed to the Confederation for help.

Austrian and Bavarian troops marched into Hesse-Cassel to support its leadership. This seemed a direct challenge to Prussia, who relied on the right to use military roads through Hesse-Cassel as a link to its provinces in the Rhineland.

Austrian and Prussian delegates met at Olmutz in November, 1850, in order to rectify the situation. The meeting was mediated by Russia.

The Elector sided with Austria, which also benefited from the support of Russia.

The agreement reached was a humiliation for Prussia: