Gideon’s reunion with the Devil

Gideon’s emotional attachment to the Devil becomes even stronger in the period following the events at the Black Jaws. Gideon often thinks about him and even has dreams about him. Gideon misses his friend terribly and longs for him to come and visit him. He is desperate for their adventure together to begin.

The Devil seems to be watching over Gideon from a distance:

Gideon gradually becomes more and more concerned that his friend is watching him but refusing to make contact:

his presence, or his absence, haunted me day and night

Gideon feels rejected by the Devil. At the beginning of January 2004, he visits the stone in Keldo Woods for the first time in months. When he arrives at the Stone, he notices the Devil standing behind it. But when he asks him to stay, he disappears.

Gideon is confused and bewildered and cannot understand why his friend is ignoring and teasing him. He becomes distraught and howls in pain and anger and misery before giving up and returning home.

Upon returning to the manse, the Devil is waiting for Gideon and they are finally reunited.

The Devil has been watching over him but kept his distance as there were people nearby. He tells Gideon that he is always:

with you in spirit, if not in person

He promises that they will meet again soon and go on their adventure together. But he tells him he must finish your masterpiece beforehand.

Gideon is greatly comforted and becomes hopeful and happy in the anticipation and desire of being together in each other’s company forever. The following day he leaves Monimaskit for the last time and travels to Ben Alder to pursue better days and other worlds with his friend, the Devil. 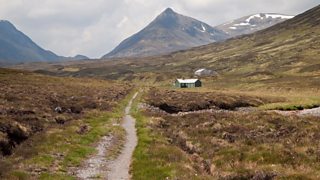 What happened to Gideon on Ben Alder is a mystery. However, nine months after his disappearance from Monimaskit his completed manuscript is discovered hidden in a B & B that he stayed in.

Shortly afterwards, his dead body is discovered on the slopes of the mountain. The official verdict is that Gideon died of natural causes months before.